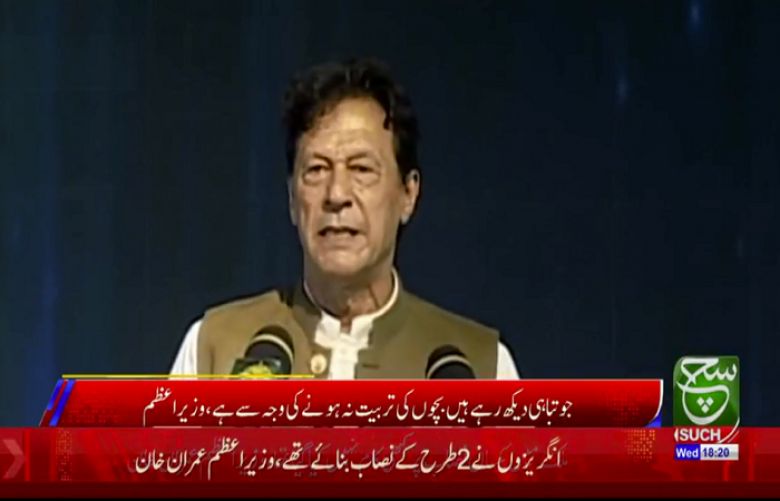 Prime Minister Imran Khan on Wednesday said he was "ashamed and pained" by the assault of a female TikToker by hundreds of men near Minar-i-Pakistan earlier this month, citing the lack of proper upbringing as a "very big reason for the destruction we are seeing in society".

In his first public remarks since the August 14 incident that sparked outrage across the country, the premier said the incidents of harassment and the sex crimes that were taking place now were "not a part of our culture or religion".

He made the comments while addressing the Punjab Education Convention 2021 in Lahore.

"When I was growing up, nobody could have thought that acts like this would happen [in Pakistan]. I have been to the entire world; the respect for women I saw while growing up existed in Muslim countries but not in the West. A big reason for the destruction we're seeing is that our children are not being brought up properly," he noted.

The prime minister highlighted the need to train children properly and teach them Seerat-un-Nabi — biographies of the Holy Prophet (PBUH) — since he said children's exposure to things was greater than ever before in human history because of mobile phones.

"It is very necessary to train our children and there is only one way to do that — make them aware of the life of the Prophet [Muhammad]," he said, adding that children should be taught about the qualities that set the Prophet apart, including his honesty and righteousness.

At the outset of his speech, Prime Minister Imran praised the Punjab government for "doing what no other province is doing". He termed the provincial government's work in the education sector "very important", saying education had not been a priority for previous governments.

He strongly criticised the English-medium educational system, saying it was inherited from the British, who built such schools to "create a class in India which is Indian in colour but thinks like us (the British), has our attitudes and through whom we can govern such a big continent".

Talking about his own experience, he recalled that when he graduated from Aitchison College and went to England for further studies, he felt like "I was made an English public-school boy, not a Pakistani. I was distanced from my culture and my religion through that educational system."

The premier said after independence from the British, Pakistan should have turned its focus on correcting the education system and developing a system to "create the nation".

"The English medium [system] evolved in such a way that there was less emphasis on education and more emphasis on creating desi vilayati (local foreigners). The attitudes and mental slavery of another culture were absorbed."

The English medium system was not changed because politicians believed their children would be "privileged and get status in society" through it. As a result, English medium schools were increased, he added.

"Our fault was that we did not develop a government education system. The private school system made us the slave of another culture," he said while terming the Single National Curriculum a "very big change".

He predicted that a time would come when people would realise that the Single National Curriculum was a "turning point".

The prime minister also criticised the use of English in functions, saying: "An entire function is held in English because of two ambassadors and it is being aired on TV which is being watched by the common man. How big an insult it is to our people who don't know English."

He said 80 per cent of the country's population did not understand English, questioning: "What are you telling them, that you're some low nation?"

He said the people's self-esteem was being "lowered" because of holding functions in English instead of Urdu.

English should not be a "status symbol", the premier stressed.