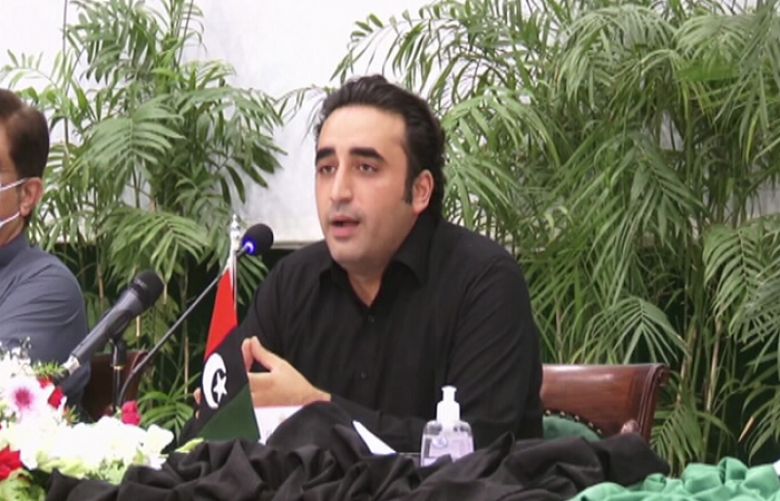 PPP Chairman Bilawal Bhutto Zardari Tuesday on Tuesday questioned how would the PTI handle the Electronic Voting Machines when they can’t deal with the Results Transmission System (RTS).

"PTI is trying its best to steal votes as the party sees its defeat in the next elections", said Bilawal while addressing a press conference in Karachi.

The PPP chairman also slammed Prime Minister Imran Khan for not providing "a single drop of water" to Karachi, adding that the PTI-led government did nothing for the development of Sindh.

"Imran Khan neither provided Sindh with a single drop of water nor did he lay a single brick in the last three years," said the PPP chairman.

“We [PPP] tried to resolve Sindh’s water issues using the province's resources,” said Bilawal, adding that the citizens of Karachi are witnessing the efforts employed by the Sindh government.

Instead of providing the people with greater job opportunities, the current rulers of Pakistan are depriving them of their sources of income, he added.

He went on to say that PM Imran Khan’s "incompetence has led to a rise in unemployment in the country."

Bilawal asserted that the people of Sindh have recognised that both PTI and MQM have neither done anything on their own nor let anyone else do it.

Speaking about the local government elections, the PPP chairman said that the local body system in Sindh has completed its tenure.

“The local body system in Khyber Pakhtunkhwa completed its tenure as well but a contempt of court is being made in Punjab,” said Bilawal.

He said that the PPP is ready for the new local body election as soon as the census and constituencies issues are resolved.

While referring to the Pakistan Democratic Movement (PDM) rallies, Bilawal said that the people should not expect him to comment on them.

"The PPP informed the PDM leaders about the constitutional way of doing things, therefore, they have the right to organise rallies," he said.