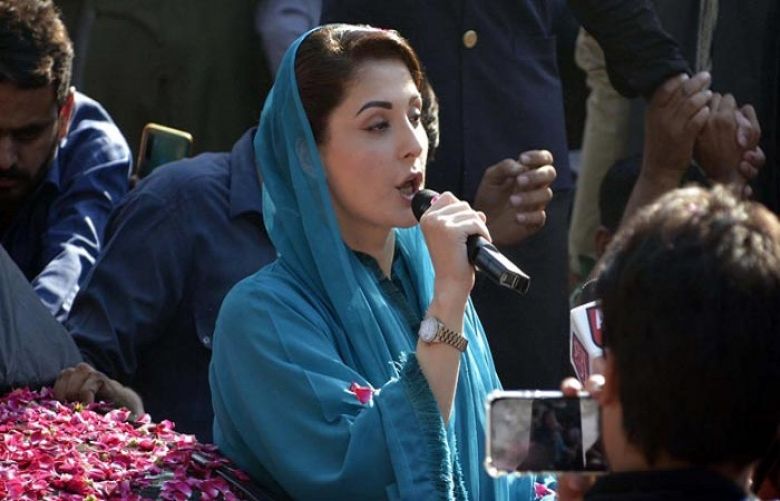 PML-N Vice President Maryam Nawaz on Thursday said that "terrorism is once again rearing its head in Pakistan".

"Never in its 70-year history has the country witnessed the decline it has in the last three years," she said in a rally in Azad Jammu and Kashmir's Muzaffarabad city.

Maryam was in the region to kick off the party's campaign for the July 25 elections to the Azad Jammu and Kashmir Legislative Assembly.

Her reference to terrorist activities being on the rise comes after the government recently revealed to the nation that last month's blast in Lahore's Johar Town was carried out by a man associated with India's RAW intelligence agency.

Maryam heaped scorn onto the PTI-led government, and especially on Prime Minister Imran Khan, terming him a "calamity" that has been "imposed on Pakistan" since the last three years.

She said the prime minister had "surrendered Kashmir to India".

The PML-N vice president accused the premier of having come into power with stolen votes and that a similar attempt was made in the Daska by-polls. The race was ultimately won by PML-N.

Maryam said that this time as well, if there is an attempt to steal the elections, the party will not stand by idly.

Chattar Klas address
Earlier in the day, she had delivered an address in the Chattar Klas village.

At the outset, the PML-N leader sought to remind the gathering that she is a Kashmiri with Kashmiri blood coursing through her veins.

She said that Pakistan stands in solidarity with Kashmiris on both sides of the divide.

The PML-N vice president said that the "son of Kashmir", Muhammad Nawaz Sharif (party supremo), will "fight every fight" for Kashmiris.

Maryam went on to refer to a video in which there were threats to "smash" her, and she said her father called her and expressed his concern for her safety, but at the same time, said that she should go to Kashmir. "You have nothing to fear from Kashmiris."

She said she wishes to pay tribute to AJK Prime Minister Raja Farooq Haider and all the workers of the PML-N, who despite attempts to "steal the election", have "stood tall in defiance like a mountain".

Rejecting the impression she said had been put forth by the government, that the PML-N is struggling to find applicants for the election, she said that the party had received at least 10 and as many as 20 applications from each district.

Referring to two PML-N members who had reportedly jumped ship to ally with the government, she said that if the government is so confident they have a large number of contestants for the election, "why did you feel the need to turn two of ours?"

Maryam also paid tribute to Raja Abdul Qayyum, who despite having lost a ticket this time to Raja Ibrar Hussain, continued to support the party and its cause. "This shows us how big hearted he is," she said.

"This is why I have kicked off the election campaign from his house," the PML-N vice president added.

She said that the main rally will take place in Muzaffarabad today, where she has "many any important thing to talk about".

"I will of course speak about Kashmir — that is why I am here — but I will also talk about how when the one who stole your votes, deprived you of wheat, sugar, electricity and medicines, what things you must ask him, what you must ask Imran Khan."

She said she will shed light on why when Nawaz Sharif was prime minister, the Indian prime minister came to Pakistan, and why when Imran Khan "came to power after stealing your votes", the Indian government had the audacity to change the status of Kashmir.

"Are 220 million people looking to you for this? For you to go barter off Kashmir and for you to return and say something like that?" she asked the premier.

She said that PM Imran Khan "can only shed tears over how the Indian prime minister does not receive his phone calls, or how the US president does not extend an invitation to him for a visit".

Maryam asked what had happened to the government's plan of observing a two-minute silence every week for occupied Kashmir over its autonomous status having been illegally stripped by India, which continues to keep the area under siege.

"That two minute silence is seen nowhere and instead you have been absolutely silent on the issue since," she said to the prime minister.

Reminding people of the Daska by-election, she said every party worker now knows "how to stop the theft of votes".

"He who stole the election back in 2018, still needs to employ such tactics three years down the line," Maryam said.

Moving on to speak about the Gilgit-Baltistan election, where seven of the party members emerged as turncoats, she said that "despite being electables and winning horses, they all lost".

She said that in GB one had to fight against a mild-mannered person such as Hafiz Hafeezur Rehman, "but here you have a man such as Raja Farooq Haider".

"If you steal this election, remember this, Raja Farooq Haider and PML-N AJK, along with Maryam Nawaz ,will hunt you down to the end of days."

She said the AJK PM "is not an easy man to defeat".

Maryam pledged to stand by Raja Farooq Haider if he stages a protest on Shahrah-e-Dastoor.

In the end, she sought a pledge from the gathering to guard their votes and "chase away any vote thieves".