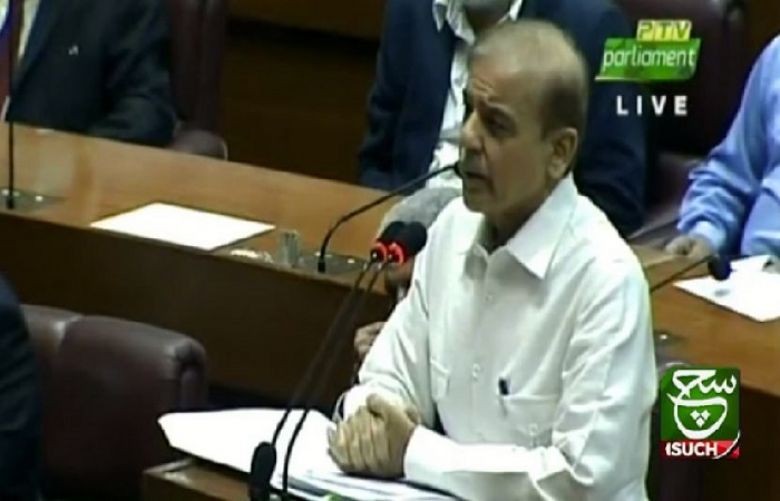 Opposition Leader in the National Assembly Shahbaz Sharif on Thursday finally delivered his speech in the Lower House after three days of rowdy behaviour by lawmakers.

Moments before Shahbaz's speech, Defence Minister Pervez Khattak had announced that the government and Opposition had reached an agreement to run the National Assembly "in an orderly manner".

The announcement followed days of ruckus and general disorder in the lower house of Parliament as the Treasury and Opposition benches sparred over the federal budget for the 2022 fiscal year.

Speaking on the floor of the NA today, the Opposition leader said all of the lawmakers present in the assembly were elected by 220 million Pakistanis and they were responsible for changing the nation's future for the better.

There was complete silence in the house during Shehbaz Sharif’s speech, who lashed out at the government of Prime Minister Imran Khan for “ruining lives of Pakistanis”.

Shahbaz, referring to the 21 government bills that were passed on June 10, said the lawmaking done a few days ago has flaws in it.

The Opposition leader slammed the government, saying the budget was "fake", as the pockets of the poor people were "empty" and they were not able to feed their families.

"In three years, 20 million people have been pushed below the poverty line, while the growth rate has come down drastically in the last year," he said.

The wages of labourers have fallen by 18% in the last three years as people keep asking where are the promised 10 million jobs and 5 million houses, the Opposition leader said.

"There are unprecedented differences between the provinces [...] If the government only develops Punjab and leaves out rest of the provinces, then this is not development," the Opposition leader said.

Shahbaz, further slamming the government, said it had devoted its energy to revenge instead of accountability. "The Opposition has been subjected to the worst kind of revenge."

He said when coronavirus had hit the country, the Opposition had sat down with the government to discuss a plan of action, but Prime Minister Imran Khan left the meeting.

"You had pushed us against the wall even when we tried to help you during the stressful times of coronavirus," he said.

Casting aspersions on the government's spendings, he asked that why were billions of rupees not spent on coronavirus vaccines?

"If this budget will not reduce poverty, then we condemn it, and we will not allow this house to pass it," Shahbaz said. "No nation prospers if the government destroys the agricultural and industrial sector," Shahbaz said.

The Opposition leader said Finance Minister Shaukat Tarin claims the country's economy is boosting, but despite that, wheat prices went up from Rs35 to Rs70.

Shahbaz said 1.1 million tonnes of sugar were exported with the prime minister's approval, and a subsidy worth billions of rupees was given on it.

"First sugar and wheat were exported, then they were imported — it incurred a loss of billions of rupees on the national exchequer," Shahbaz said.

Shahbaz said during the PML-N's government the International Monetary Fund's programme had been completed, but now, the progress has reversed during PTI's three years.

"The government should inform the Opposition about the conditions of the IMF," he said, as the government keeps reiterating that the international money lender had imposed harsh conditions.

The Opposition leader slammed the prime minister for not taking the house in confidence.

Taking a jibe at PM Imran Khan again, Shahbaz said that before his election, he stood upon a container and made tall claims about ending corruption from the country, but failed to do so.

"Today, the practice of giving and taking bribes has become rampant in Punjab [under the PTI government's rule]," he said.

Shahbaz also talked about the efforts the previous PML-N government employed to make Pakistan better and said that it was Nawaz Sharif who eliminated several problems of the country, including terrorism, electricity load shedding, and patwari culture because he had all the provinces on the same page.

What happened in NA?

On Tuesday, the NA proceedings witnessed humiliating scenes when the ministers and parliamentarians were seen creating a ruckus, using filthy language, whistling, and attacking each other with budget books during the speech of the Opposition Leader in NA Shahbaz Sharif on the federal budget.

During the uproar, one of the members from the treasury benches threw a book towards Shahbaz, which fell on the dais in front of him. The members from two sides came close to a physical brawl in front of the NA Speaker’s chair, but he could do nothing except for making requests and suspending proceedings time and again.

The security staff of the NA made a protective circle around the Opposition leader and pushed back the government members, who were trying to move towards him.

Opposition members also encircled Shahbaz Sharif to prevent him from any attack.

In the meantime, one of the security staffers, Asif Kiani, was slightly injured when a book hit him close to his eye.

A video showing Ali Nawaz Awan of the PTI abusing an opponent also went viral on social media. However, the PTI member said it was Shaikh Rohail Asghar of the PMLN who used abusive language first.

Following the incident, the NA Speaker Qaiser imposed a ban on seven lawmakers, preventing them from entering the Parliament House until further notice.

The notice said these lawmakers' conduct was “grossly disorderly” during the speech of Opposition Leader Shehbaz Sharif.

Three members from the ruling PTI and four opposition members — three from PML-N and one from PPP — have been found to have “violated” the rules despite the “repeated direction” of the speaker.

The action was taken after a meeting of Asad Qaiser with Prime Minister Imran Khan during which the NA situation was discussed.

On Wednesday, Shahbaz once again failed to deliver his speech in the National Assembly for the third time — despite being surrounded by sergeants-at-arms — as commotion by lawmakers continued in the house.

Shahbaz made several attempts to deliver his speech on the federal budget but did not succeed as members from the treasury benches continued to disrupt him, despite NA Speaker Asad Qaiser's repeated warnings and directives to maintain order in the house.

There were three attempts made by the speaker to conduct proceedings, with the session put into recess twice, before finally being put off for a third time in the day.

The speaker, before putting off the proceedings for the first time, said that the events that had transpired on June 15 were unfortunate and that he would not continue the session until the lawmakers sorted out their differences.

"Action has been taken against lawmakers who had used indecent language in the house on June 15 [...] a parliamentary committee will be formed to probe the matter further," he said.

The committee will comprise of six members each from the treasury and Opposition benches, the speaker announced, before he delayed the session for the first time as lawmakers continued to disrupt Shahhaz's speech.

After 15 minutes, the session resumed and Shahbaz spoke for a while, slamming Prime Minister Imran Khan for "ordering lawmakers to use indecent language" in the NA.

As he delivered his address, the treasury benches started to hurl abuses at him, with the speaker repeatedly asking them to maintain decorum in the house.

Yesterday's proceedings in the NA were one of the "darkest days" in Pakistan, Shahbaz said, adding he could not repeat the words that the members from the treasury benches had uttered.

"Mr Speaker, it was your duty to maintain order and prevent such an incident from happening [...] even today they haven't stopped," he has said.

While the PML-N president leader was speaking, an Opposition member threw a "full bottle" at the treasury benches, Federal Minister for Planning and Development Asad Umar said, adding that it hit and injured Akram Cheema.

The speaker asked the sergeants to show the door to the rowdy member throwing bottles and other missiles towards Shahbaz and postponed the session.

When the session resumed for a second time, the chaos did too.

As it became apparent the uproar has no signs of letting up, the speaker postponed the proceedings for the day.

"We will not resume the session today until we arrive at an understanding on how it is we wish to proceed," he said.

Earlier in the day, Defence Minister Pervez Khattak announced that the government and Opposition have reached an agreement to run the National Assembly 'in an orderly manner'.

Flanked by Federal Information Minister Fawad Chaudhry, Khattak said during his press conference that NA Speaker Asad Qaiser had held a meeting with PTI, PPP and PML-N leaders to discuss the situation.

Khattak regretted that the ruckus in the assembly was not a good omen for the Constitution and democracy and condemned the unfortunate events in the house.

“It is the responsibility of both the Opposition and the government to maintain order in the House. We must respect each other."