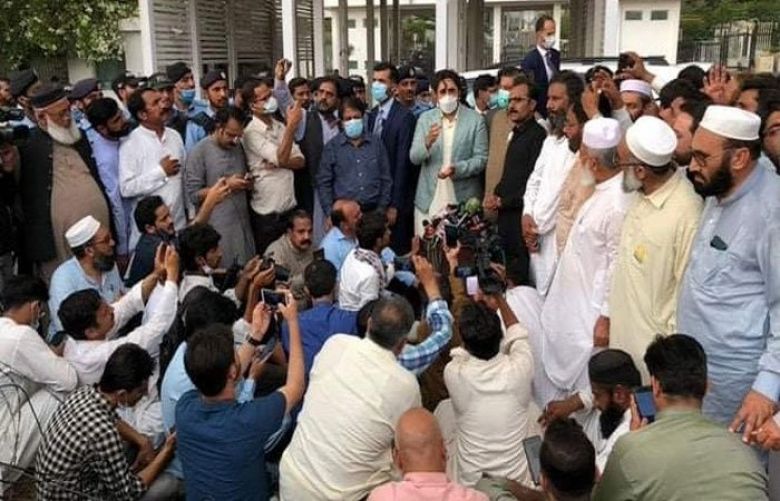 Government employees protested outside parliament on Friday as a session of the National Assembly took place inside with Minister for Finance Shaukat Tarin unveiling the national budget for FY2021-22.

The employees had gathered there after having travelled from different provinces, demanding a raise in salaries.

The protesters said that for the past three years, they had not seen any raise in pay.

They also demanded that contract employees be quickly regularised.

A large contingent of police was present outside the parliament to guard against any untoward incident.

The road leading up to the parliament was blocked off with barbed wire, but it proved unsuccessful to deter the protesters, who jumped over it.

The government employees blocked off Shahrah-e-Dastoor (Constitution Avenue) where the parliament and all other important buildings are located and staged a sit in at the main gate of Parliament House.

Later in the evening, the protest came to an end, with the protesters asking the government to review its decision of a "mere 10% increase".

"Salaries should be raised by 25%, otherwise at the end of June, we will announce our next course of action," they said.

Later, after the session had ended, PPP Chairman Bilawal Bhutto Zardari joined the government employees' protest to express solidarity with them.

He met the representative of the government employees and assured him of support for their demands. He said that he will raise their demands in the Parliament as well.

The PPP chairman thanked the media for reporting on the protest and said that the media should become the voice of the poor. He hoped that the media will "expose the injustices" to the government employees as well as the poor people of Pakistan over the last three years of the PTI government.

"The government claims that the economy is taking off and we are on the path to conomic progress. Why then are the salaries of the government employees not increased?" he asked.

"Inflation in Pakistan has increase many folds, the poverty and unemployment has reached an unprecedented level during the last three years. The government should have increased salaries to a maximum level amid the worldwide pandemic," he argued.

"The government has the responsibility to increase salaries with the proportion of inflation in the country," he said, adding that these injustices will "not be tolerated anymore".

Bilawal said that he has directed Sindh government to set the minimum wages at Rs25,000. "We will do everything in our capacity to stop this PTIMF budget in the National Assembly," he told the protesters.

The PPP chairman said that "if this PTIMF budget is passed in the assembly then he will go to every nook and corner of the country to tell the people of Pakistan that they are suffering due to incapacity and inability of this government".

The poor man is bearing the burden of this PTIMF budget, he said, adding that only a government of the people can solve the problems the people are faced with.

He assured the protesting employees that the PPP will run a campaign to "get rid of this PTIMF budget".

Replying to question by journalists, Bilawal said that the PPP is demanding the government act on the agreement it made with the employees.

"The government should increase salaries like the PPP had increased them during its tenure," he said.