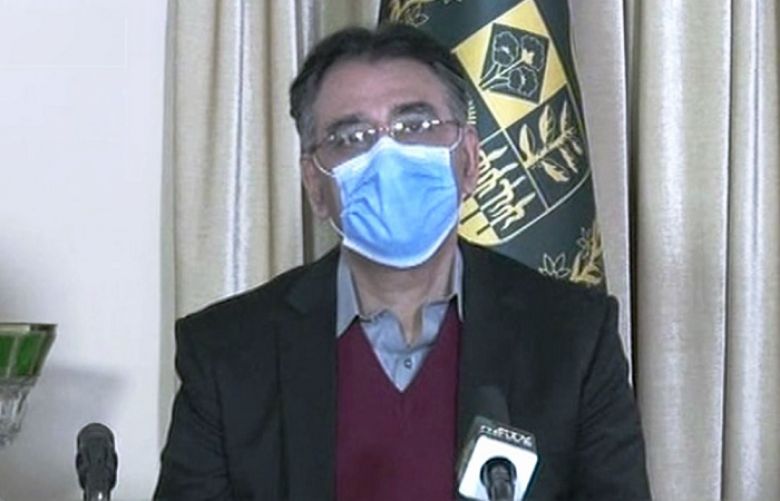 Minister for Planning, Development, and Special Initiatives Asad Umar on Tuesday held a press conference in Islamabad and talked about the allocation of the budget that the PTI-led government has allocated for different projects for the fiscal year 2021-2022.

Providing details, Umar said that the government has to increase investment in health, education, and the environment, adding that all regions of the country should have equal opportunities for development.

He said that the country's production sector will have to move forward but for this purpose, a lot of funds are needed, adding that the government has limited funds.

The federal development budget will be Rs 900billion, he said, adding that the government will give priority to water projects in the next financial year as well.

"Development budgets for energy, water, social development and science and technology are being increased, while major road projects, including the Sukkur-Hyderabad Motorway, will be made in the next financial year, Umar said.

Providing further details, the minister said that the Sukkur-Hyderabad Motorway project is worth Rs200 billion and added that other projects, worth Rs530 billion, will be approved by the public-private authority.

Speaking about the water projects in Sindh, Umar said that the new budget also has allocations for the K-IV and Nai Gaj Dam, adding that water projects worth Rs25 billion already exist in Sindh.

He also said that Rs100 billion is being spent on the power transmission system, while funds are being set aside for the Tarbela expansion project.

"A sum of Rs44 billion has been earmarked for the higher education sector in the upcoming budget, said Umar. "As for the social sector, 20% has been set aside instead of 11%."

He said that the government has spent Rs51 billion for the health sector in the current fiscal year, adding that Rs85 billion have been set aside for the Bhasha Diamer and Mohmand Dams.

Speaking about the China-Pakistan Economic Corridor (CPEC) and its related projects, the minister said that the government has set aside Rs87 billion for the purpose, while Rs42 billion have been kept for the western route.

Responding to Sindh Chief Minister Murad Ali Shah's comments, who said that the Centre has "ignored Sindh in the upcoming budget," Umar said that while the Sindh government has been hurling allegations at the Centre for not allocating sufficient budget to it, projects in Sindh have still not completed for which the funds were already given.

"The PPP has not built an inch of the motorway in Sindh, while projects worth Rs90 billion are already underway in the province," said the planning minister, adding that Sindh is getting its full share.

A day ago, the government organised a meeting of the National Economic Council (NEC) in Islamabad, with Prime Minister Imran Khan in the chair.

During the meeting, the government announced that it has targeted the gross domestic product (GDP) growth at 4.8% for the next fiscal year.

The NEC approved the macroeconomic framework and GDP growth projections for the fiscal year 2021-22.

The meeting was informed the PSDP would cater to the government’s plans to increase focus on lagging areas and regions, the statement said, adding for this purpose, sufficient allocations had been made for projects in South Balochistan, various districts of Sindh, as well as for Gilgit Baltistan.