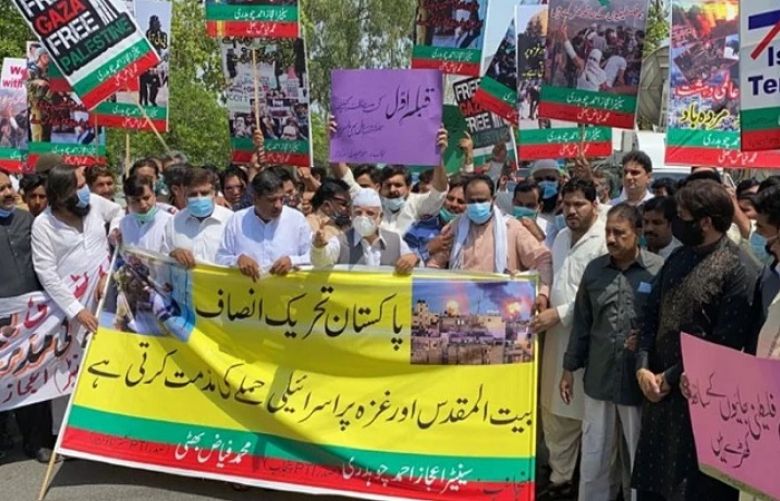 Protests and demonstrations were held across the country on Friday as Pakistanis expressed solidarity with the Palestinian people amid brutal attacks by Israeli forces.

Protests were held in several cities, including Lahore and Multan, where Israeli atrocities against Palestinians were strongly condemned. The protesters demanded the international community take notice of Israel's bombing of Palestinian land and its people.

During a PTI-organised protest in Lahore, party leader Ijaz Chaudhry said innocent Palestinian children were dying due to Israel's attacks and demanded the Muslim world adopt a joint strategy against Israel.

Bombardment continues
Even today, Israel has continued to bombard the Gaza Strip with air raids and artillery shells, Al Jazeera reported, as it ramps up deployment of troops and tanks near the besieged Palestinian enclave.

Since hostilities caught pace on Monday, at least 122 Palestinians, including 31 children, have been killed and more than 900 wounded since.

"Hundreds of Palestinian families have taken shelter in United Nations-run schools in northern Gaza to escape Israeli artillery fire, with residents reporting that the Strip had experienced its most violent night," the publication reported.

A day earlier, Muslim worshippers at the Islamic Center of Passaic County in Paterson, New Jersey, celebrated Eid-ul-Fitr with masks and prayers outdoors, as the conflict between Israel and Gaza cast shadowed over the festival marking the end of Ramadan.

"We celebrate this with very, very heavy hearts because our brothers and sisters in Palestine are suffering," said mortgage broker Zaher Barkawi.