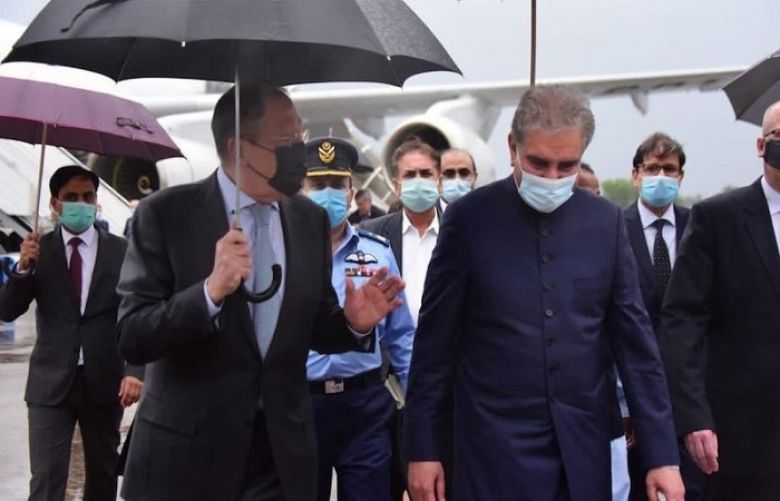 Russian Foreign Minister Sergey Lavrov arrived on Tuesday for a two-day visit in Islamabad, where he was received by his Pakistani counterpart, Shah Mehmood Qureshi.

This is the first visit by a Russian foreign minister to Pakistan since 2012.

With the Afghan situation on top of the agenda, the two foreign ministers will also discuss bilateral ties, including economic cooperation, counter-terrorism and socio-economic ramifications of the Covid-19 pandemic.

According to a statement issued by the Russian Foreign Ministry, FM Lavrov will also hold meetings with the country's top political and military leadership.

"The parties plan to discuss the current state and prospects for the development of bilateral relations with an emphasis on cooperation in the trade, economic and counter-terrorism fields, exchange views on topical issues of the international and regional agenda," the statement said.

"Today, Pakistan is an important foreign policy partner of our country. Fruitful interaction is maintained at the international organisations, primarily in the UN and its specialised agencies. The cooperation between Moscow and Islamabad is based on the coincidence or similarity of positions on most of the problems of the world community, including issues of strategic stability and countering terrorism," it added.

Leaving the bitterness of the past behind, Islamabad and Moscow have developed strategic trust and share views on various issues, including the Afghan problem.

H.E. Sergey Lavrov, the Minister of Foreign Affairs of the Russian Federation arrives in Islamabad for his official visit. Foreign Minister @SMQureshiPTI received his Russian counterpart.

Russia recently hosted a conference of Pakistan, the United States, China and representatives from the Afghan government and the Taliban as part of its efforts to break the stalemate in the ongoing Afghan peace process.

Russia, like Pakistan, China and Iran, is concerned that the US withdrawal from Afghanistan without a prior peace deal could jeopardise regional security.

The statement issued by the Russian foreign ministry termed the situation in Afghanistan a "common concern".

"We look forward to an early finding of a constructive solution in order to end the civil war in the Islamic Republic of Afghanistan through agreements on the formation of an inclusive government with the participation of the Taliban movement," it said.