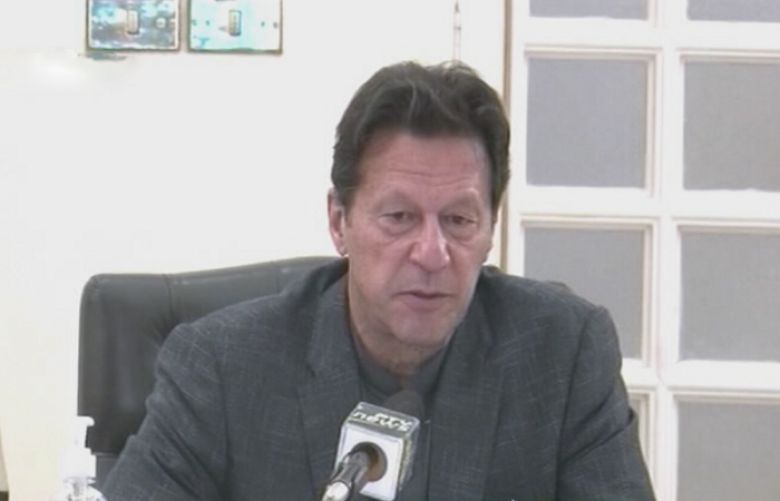 Prime Minister Imran Khan on Tuesday said his government's "main concern is to lift our people out of poverty" and given the challenges posed by the third coronavirus wave, Pakistan will be approaching the International Monetary Fund for assistance.

His remarks came as he held a meeting in Islamabad with members of the United Nations Development Programme, during the launch of a report released by the global body on human development in Pakistan.

PM Imran Khan said that despite Pakistan's economy moving in the right direction with indicators achieving positivity, due to the third coronavirus wave, "we see disruptions ahead" and so the International Monetary Fund will have to be approached.

"The service industry has been really badly hit [...] we will have to give incentive packages," said the premier, noting that a new Ehsaas Programme effort will require the IMF's help.

"The head of IMF realises, I have read her statement and I think she realises this is a very unique situation. You cannot suppress demand and you cannot impose restrictions when the people are already suffering," PM Imran Khan said.

"So will be talking to them personally and I also look forward to reading in detail your suggestions how we can protect the most vulnerable in our society," the premier said.

"All this data you have gathered will really help us in fine tuning our policies," the prime minister told the UNDP, as he thanked them for the report.

Once we have this data, we will be able to directly subsidise the population which is in actual need of financial assistance, such as the small farmer and the urban consumer facing inflation, the premier said.

"We will be able to protect these people by directly subsidising them," PM Imran Khan added.

He noted that the report released by the UN body points out the areas that have deficiencies, the people that have been left behind, and the situation of the religious minorities and transgenders.

"It is defined by how it is planning to reduce this inequality," he added.

PM Imran Khan said that "elite capture" is a problem that plagues not only developing countries but is also a part of developed countries.

He said "about 60 people own about the same amount of wealth owned by three billion people on this earth, which are shocking figures".

"There has to be something wrong with the world order where such inequality exists [...] on one side such opulence exists — wealth that can never be spent in ten lifetimes — and on the other you have extreme poverty," the premier said.

He said that to add to that, the coronavirus pandemic has made the poor — in both rich and poor countries — even poorer, whereas the rich have only gotten richer.

The prime minister also discussed the report by the Financial Accountability, Transparency and Integrity (FACTI), that had found that every year $1 trillion leave the developing countries and go to tax havens or into properties in richer countries.

He also noted that $7 trillion in stolen assets from these developing countries is parked in these safe tax haven destinations.

"This one fact is the reason behind this huge inequality in this world and the cause for huge poverty because when this sort of money leaves the countries, employment is created in the countries it is destined for," PM Imran Khan said.

He said what ends up happening is that people in poor countries are deprived of employment and this flight of wealth, which could have been spent on human development, ends up contributing to poverty.

The prime minister said that furthermore, the currency devalues with so much money leaving the country, which causes more poverty and inflation.

"This is a vicious cycle going on and really, unless something is done about it, I am scared that the richer countries will have to build these walls to keep these economic immigrants out who will be trying desperately, risking their lives to reach richer countries," he said.

The premier said that he considers this departure of a country's wealth a big factor which is leading to more deaths, poverty, and misery in this world, with the rich countries having no incentives to stop it as "they gain from it".

He said sugar is consumed among the poor people the most "because it is like the dessert of a poor family". "For children in a poor family, sugar is everything."

The premier said therefore, as it is consumed by the masses, the prices are jacked up by the cartels, which are all politically connected.

"We will strengthen the Competition Commission to stop these cartels from making these mega profits at the expense of the people who actually then bear the burden because of inflation and they get poorer," he said.

The premier said it is a "source of great satisfaction" for his government that the report found Khyber Pakhtunkhwa to have improved the most in terms of human development among all the provinces.

He also praised Sania Nishtar's efforts for her Ehsaas Programme, that distributed "a huge amount of money" during the COVID-19 crisis in a "short space of time".

The prime minister said that whereas in Lebanon people were unhappy that aid was distributed on a political basis, "no one could say that about us".