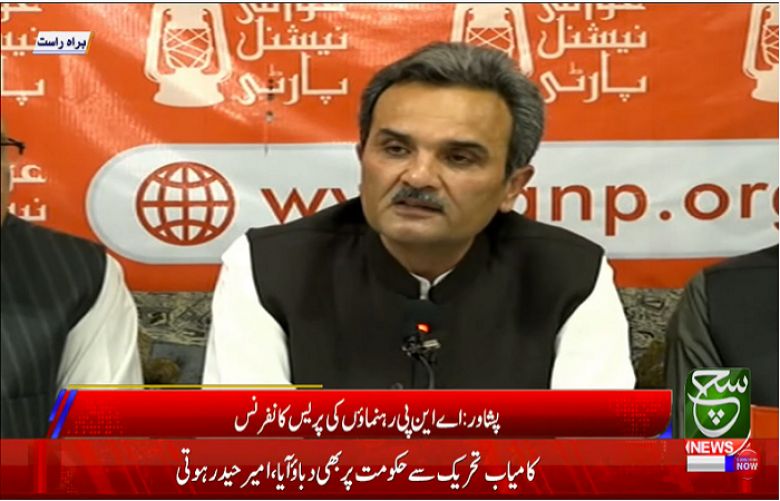 The Awami National Party (ANP) on Tuesday formally announced that it was withdrawing from the Pakistan Democratic Movement (PDM), saying the opposition alliance had been "hijacked" by some of its members for their own interests.

Speaking at a press conference after a meeting of the party leadership, ANP central vice-president Ameer Haider Khan Hoti criticised the issuance of a show-cause notice to the ANP by PDM secretary general Shahid Khaqan Abbasi of the PML-N for helping the PPP in getting Yousuf Raza Gilani elected as the opposition leader in the Senate.

He said after the PDM's planned long march had to be deferred due to differences among the parties on the issue of resigning from the assemblies, there was a need to end the "disagreements and bitterness" in the alliance.

"Those reservations should have been addressed in a meeting of the PDM leadership. However, it was not done and the PPP's concerns remained," he said, adding that in such a scenario, the ANP openly decided to vote for the PPP candidate (Gilani).

The ANP leader said his party had been ready to explain itself, but asked whether explanations were also not due over "the PML-N collaborating with the ruling PTI and PML-Q to get their senators elected in Punjab unopposed; over the loss of the PDM candidates on the Senate technocrat and women seats in Khyber Pakhtunkhwa; and over the JUI-F allegedly forming an alliance with the PTI against the PPP in Larkana".

He added that the ANP had already given the explanation sought from it in the show-cause notice to Abbasi and two other PDM leaders.

"If they have issued us the show-cause notice despite our explanation, it clearly means they want to damage the ANP's reputation. It is very clear two or three parties want to take the decisions for the [entire] PDM," Hoti said, alleging that the ANP and PPP had been "sidelined" by the other PDM parties.

Instead of "attacking in this manner", Hoti continued, the PDM chief should have given the opportunity to all the parties and tried to end the differences among them.

"The ANP cannot be part of a journey in which some elements want to pursue their personal agendas. Therefore, we have reached the conclusion that those who sent the show-cause notice made an unannounced announcement of the end of PDM," he said, announcing that he and other ANP leaders would leave their positions in the PDM.

"The ANP is withdrawing from the process where some specific parties have hijacked the PDM for their own political agendas."

Last week, the PDM had decided to part ways with the PPP and ANP, and form a new alliance of five opposition parties having 27 members in the Senate. The decision was taken at a meeting of senators of five opposition parties, minus the PPP and the ANP, held on Friday. The five parties were namely the PML-N, Jamiat Ulema-i-Islam (JUI-F), Pakhtunkhwa Milli Awami Party (PkMAP), National Party (NP) and Balochistan National Party (BNP-Mengal).

They are angry over the PPP’s move to get the slot of the Senate opposition leader with the support of the independent senators known to be affiliated with Balochistan Awami Party (BAP), a party considered to be created by the establishment only weeks before the 2018 general elections and which is a partner with the PTI in the ruling coalition.