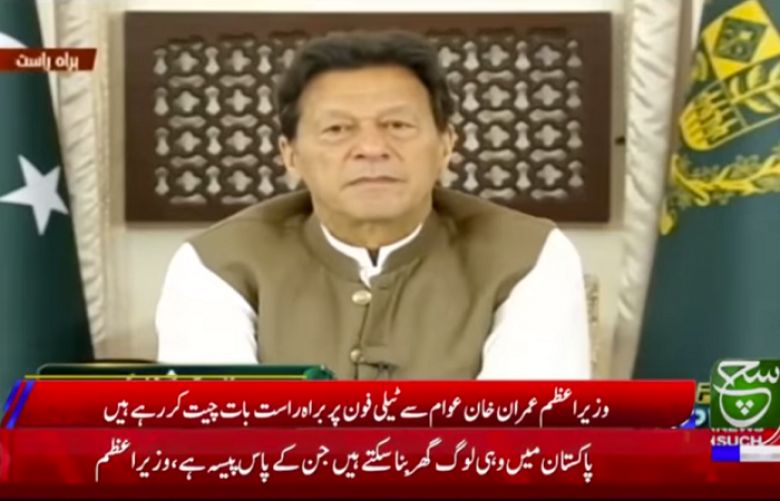 The prime minister was answering questions from the public who were calling in with their queries. The premier was answering the questions, often seeking aid from his ministers and advisers, who were sitting in front of him.

Before he started taking calls from the public, the prime minister urged people to "help yourselves and help the nation" by observing coronavirus SOPs.

"I will advise everyone to wear this mask," he said, gripping one in his hand.

PM Imran Khan said it was the government's responsibility to protect people during the infection. He cautioned people to wear masks in closed rooms where there was no ventilation and in buses and other means of transport.

In response to the first caller, the prime minister said Pakistan was importing gas from other countries at exorbitant rates while the resources it was tapping in its own country, were on the decline.

He said countries progress due to higher education among the masses. "We also have to think about what sort of high education we have [to impart]," he said. "Buildings do not bring about quality education; it also depends on what type of degrees they are handing out to students," he said.

PM Imran said the government is bringing about "huge changes" in the HEC, adding that the previous chairman of the education commission was not selected by the incumbent government.

In response to the second caller who complained about inflation, PM Imran Khan said prices of vegetable and other food items were on the rise as the farmers who supplied them wanted their products to be sold at high prices in the market.

"The middlemen are making a lot of money from this," he said.

The prime minister said his government was working towards an ingenuous solution through which they are aiming to connect the primary producers of these items to the final consumers.

He said the masses will see the positive effects of the rupee strengthening against the US dollar, adding that the local currency's performance had already led to a decline in prices of diesel.

The premier spoke against "hoarders and mafias", saying they were responsible for the hoarding of necessary food items in the country.

"For the first time, we are going after mafias in Pakistan," he said. "The FIA completed its inquiry for the first time to bring to everyone's knowledge how a few people hoard basic food items so their prices skyrocket and they make profits out of it," he said.

Addressing the caller by name, PM Imran Khan said: "Ambreen, you need not be frightened [over inflation] because the government is working towards tackling this solution".

He revealed the government is working towards revolutionising the agriculture sector so Pakistan is self-sufficient in basic food items and other products.

The third caller raised a couple of questions, among them one related to the health system. PM Imran Khan said Pakistan was introducing the health card system due to which people will be able to get themselves treated via insurance at any hospital across the country.

"I assure you, this facility is not extended to people even in developed countries," he said.

The prime minister highlighted how the government was bringing about measures in the health sector, including exempting duty from hospital equipment from abroad.

Answering another caller's complaint on corruption, PM Imran Khan said "corruption was a cancer" which ends up feasting on a country's progress like termites feast on wood.

He said when prime ministers became corrupt and stole billions from the masses, it resulted in money going out from Pakistan into other countries.

PM Imran Khan cited a UN report, saying that a mammoth total of $1,000bn was sent to developed countries from poor states each year through corruption and money laundering.

"I am one of the few heads of state in the world who is calling upon the developed countries to return our money back to us," he said, adding that the rich countries were reluctant to do so as they were reaping the benefits of it.

He said Pakistan was fighting a war against corruption, adding that a handful of people in the country were being brought to book for their crimes in Pakistan.

"The entire nation will have to fight this war. Imran Khan alone cannot win it," he said, lamenting how the people used to shower rose petals at people who were released from prisons after being accused of being involved in corrupt practices.

The prime minister spoke out against shamelessness, saying it was giving rise to temptation in society.

"If you keep on increasing shamelessness in society, every person does not have the willpower [to control it]," he said.

The prime minister recounted his experience in London, when "sex, drugs and rock n roll" were just taking a hold in the country. He said society as a whole will fight this menace too, adding that such shamelessness was giving rise to rapes and other cases of sexual violence.

"Why did I bring Turkish drama series Ertugrul to Pakistan?" he asked, saying that it was entertainment that did not breach any moral boundaries unlike Bollywood and Hollywood movies.

Answering another caller's questions, PM Imran Khan said in Pakistan, his party had brought about a "democratic change" unlike the revolutions in France and Iran.

He said the PTI had defeated a two-party system in Pakistan and helped new people take up ministries. The prime minister said previously, the two parties who were at each other's throats, were now demanding he step down and were on one page.

"This is the change," he said, adding that now, a government was in place which did not tolerate corruption and was not willing to let the menace go unchecked.

Citing his government's achievements, PM Imran Khan said the rupee had strengthened for the first time in many years.

"It means we are doing something right," he said. "Have a bit of patience and this country will take off," he added.

The premier said his government was bringing a new agriculture policy which would ensure Pakistan made a lot of progress.

Sources confirmed the prime minister rejected advice from his aides and ministers, who suggested he answer questions from people in a recorded telecast. The prime minister, instead, insisted on answering the questions during a live transmission.

"The prime minister will interact with people via telephone calls tomorrow ( Sunday April 4) live telecast from 11:30 am-1pm," he had tweeted on Saturday.

Previously, Senator Faisal Javed had announced that the prime minister will directly be responding to queries from people.

The senator had said the premier's conversation with people would be broadcast live on television, radio and digital media.

The last time the prime minister took calls from people was during a telethon for Naya Pakistan Housing scheme on March 28.

Prior to that, in January, a similar announcement was made, encouraging people to put in their calls and speak to the prime minister directly about the issues that they wish for the government to address.

During his first speech after his victory to become the prime minister, PM Imran Khan had also promised he will be "answerable" before the people twice every month in a "Question Hour" in the National Assembly.

His interactions over the course of the last year with people via video messages on social media or televised addresses have largely focused on the coronavirus pandemic, urging people to realise the importance of exercising caution and wearing masks so Pakistan can successfully reduce the spread of the virus.