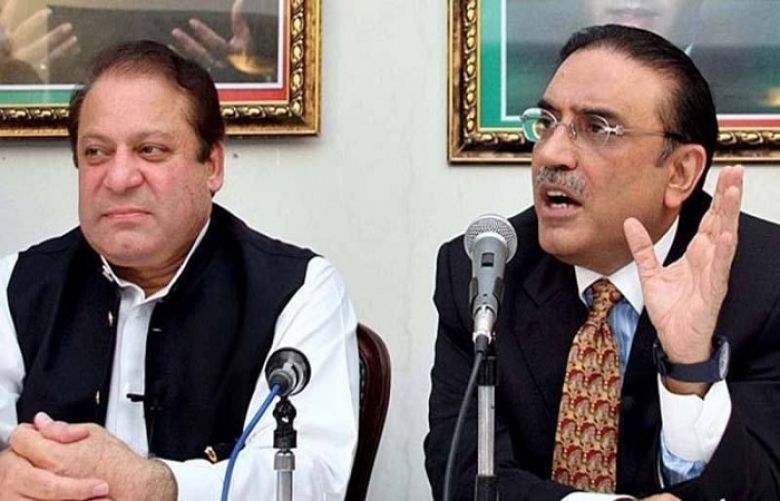 PPP President and co-chairman Asif Ali Zardari held a long video conference with PML-N supremo Nawaz Sharif on Tuesday, in which according to sources, the PPP leader urged the PML-N leader to come back to Pakistan.

"Nawaz Sharif sahab, if you are prepared to fight a war, you will have to return to your country," sources within the PPP quoted Zardari as saying.

"If we all are out to fight, then we must all be prepared to go to jail," Zardari further said to Nawaz.

The conversation between the two leaders was held during a meeting of the Pakistan Democratic Movement.

The PDM leaders are sitting together in the federal capital to review the political situation in the country after the recently-held Senate polls and by-elections, which, according to them, have shaken the ruling party.

The contentious point of the agenda is the resignation from assemblies which has put the PPP at loggerheads with PML-N and the JUI-F who had been calling to resign from the parliament since December. The PPP, however, has been convincing them to opt for an in-house change and use the resignation strategy as a “last resort”.

According to the sources, Zardari told Nawaz that "whether it is the long march or a no-confidence motion, you will have to come to Pakistan".

"I am ready for war but my domicile is different [...] Mian sahab, you represent Punjab" sources further quoted Zardari as saying.

Zardari also discussed at length the measures he took during his presidency, the sources said.

"I gave powers to the parliament and approved the NFC (National Finance Commission Award) for which my party and I were punished," he said.

Zardari said the PPP "is ready to fight until its last breath", also citing how he had spent 14 years of his life in jail.

"You never increased people's wages in your tenure, whereas I increased them," sources quoted Zardari as telling Nawaz.

Speaking of resignations from the assemblies, Zardari said that the move is tantamount to "strengthening Imran Khan's position".

The PPP co-chairman also said that no decision that sets the parties off on divergent paths must be made.

"Any differences between us will only serve the interests of those who are enemies of democracy," he said.

Zardari, according to sources, said: "We do not fight from the mountains. We fight from within the parliament."

The sources said that the PPP leader told the PML-N surpremo: "Mian sahab if you want en masse resignations then not only us, everyone will have to go to jail."

According to PPP sources, Zardari said that it is "not the first time that democratic forces have witnessed rigging".

"We mobilised the entire nation when Benazir returned to Pakistan in 1986 and then in 2007," Zardari said, according to sources.

The long march will have to be organised in the same manner as our preparations in 1986 and 2007, he said.

"The struggle against the establishment must carry on for democratic stability," he added.

Zardari urged Nawaz to return to Pakistan along with Ishaq Dar. "We will then all fight together," he said.

He said that while the other Opposition parties contested the Senate elections, Ishaq Dar did not even come to cast his vote.

"When you return to Pakistan, we will hand over our resignations to you," Zardari added.

Sources said that amid all the insistence by the PPP co-chairman for Nawaz to return, PML-N Vice President Maryam Nawaz said that her father's "life is in danger" and questioned how he can return under the circumstances.

Sources said that she asked: "Does Zardari sahab guarantee that my father's life will not be in danger in Pakistan?"

Maryam then reportedly said that she is in Pakistan "of her own accord".

"Just like you are on video link, so is Mian sahab," she added.

She said that Nawaz's life is "threatened under NAB's custody" and that he had had "two heart attacks while in jail".

The PML-N vice president, according to sources, said that her party, despite being the "largest in Pakistan" had supported PDM. She said PML-N had followed all decisions made by the platform and even aided in their implementation.

She said that when PPP expressed their opposition to resignations, PML-N supported them to avoid any differences in opinion.

According to PPP sources, Zardari later apologised to Maryam, to which Maryam responded by saying: "It was never my intent to have you apologise. I merely considered myself as a daughter to you and complained like Bakhtawar or Aseefa would."

Maryam said she had witnessed her father going to 150 appearances before National Accountability Bureau and recalled how she had been arrested in front of her father.

"My father left my mother on her death bed and came back to Pakistan," she said.

Maryam later said that they must let bygones be bygones and bury the matter.