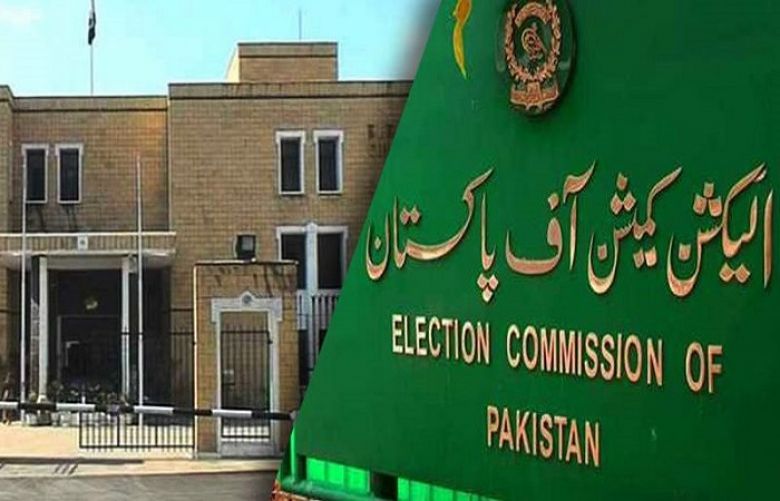 The Election Commission of Pakistan on Friday expressed disappointment over Prime Minister Imran Khan's hard-hitting speech and statements from a few cabinet members from a day earlier, stressing that the Senate elections were held according to the law and Constitution.

In a written statement, the commission said that it has "never come under any sort of pressure and God willing, will not in future as well".

"We cannot ignore the law and the Constitution to please anyone," said the ECP its statement.

The written statement from the Election Commission of Pakistan (ECP) on PM Imran Khan and the government's criticism of the Senate elections.

Referring to former prime minister Yousaf Raza Gilani's victory over Dr Abdul Hafeez Shaikh, the ECP said it 'rejects' the analysis and criticism that is being levelled over one result of the Senate elections.

"This is the beauty of democracy and independent elections and the secret ballot which the entire nation witnessed, which was according to the Constitution," it said.

The ECP said that it had heard all delegations that had called on it to discuss election-related matters and conducted a detailed review of their concerns and recommendations ahead of the Senate polls.

"The election commission hears everyone but fulfills its responsibilities in accordance with the law and Constitution and takes decisions independently, not under any sort of pressure," the statement read.

The ECP wondered why elections for the upper house of the parliament, which were held on the same day and managed by the same ECP staff, were accepted by critics where they had won but rejected where they lost.

"Is this not an open case of contradiction?" asked the ECP.

The ECP urged critics of the Senate elections to come forth with evidence and then accuse the commission of any wrongdoing. "Let us carry on with our work, don't sling mud on national institutions," read the ECP's statement.

The ECP had convened an important meeting today to review PM Imran Khan's speech, who had levelled serious allegations on the role of the electoral body during the Senate polls.

The prime minister, in his televised speech, had slammed the ECP for not taking measures to ensure transparent polling and held it responsible for the illegal practice of buying and selling of votes as it did not introduce traceable ballots.

Chief Election Commissioner Sikandar Sultan Raja summoned the meeting to review the statements and allegation levelled by the prime minister against the ECP.

All members of the ECP attended the meeting.

The commission had acquired the video of the premier's speech.

PM Imran took the ECP to task for failing to ensure a transparent election in his speech after the upset defeat of PTI candidate Dr Abdul Hafeez Sheikh for the Senate seat from Islamabad on Wednesday.

"Why did you go to the court and say there should be a secret ballot? Does the constitution ever allow a theft of votes and for bribery to occur like has been in the last 30 years?" the premier asked.

He said the court had allowed the Commission to hold a secret vote but have some sort of identification mechanism whereby the PTI could now have discovered the 15-16 lawmakers "who sold themselves off".

"You saved those criminals with this secret ballot and you hurt our democracy," he said, in indignation at the ECP's move to ignore the Supreme Court's provisions to identify the ballots.

"Did you not know it was your responsibility to investigate such incidents? All the agencies fall under you. This entire drama unfolded in front of everyone," he said, referring to the video where lawmakers can be seen shovelling currency notes into their bags.

"When the country's leadership takes and gives bribes, will you ask the common man to become honest then but do these things yourself?"

He quoted a Chinese saying that says "fish rots from the top".

"You allowed corruption to occur at the top, and this happened right before you, and you knew it would happen. I kept saying that markets have opened and there is an auction going on. And when the Supreme Court gave you a chance, what reason was there to not bar code a mere 1,500 ballots?" the premier asked in exasperation.

"You provided an opportunity for the country's democracy to be discredited [...] I ask you has the strength of our democracy gone up or down with this open horse-trading?" he went on to ask the ECP.

"Pakistan was the name of a great dream. It was meant to be an Islamic welfare state and Allama Iqbal said it will be a shining example for the world.

"Now this video has come and you have no idea how much money has been used and how people sold their souls and how our politics was corrupted," PM Imran Khan said.

"And if such people come into power, how will they serve the nation or recover our nation's wealth? [...] And then they say corruption is rampant in our country," he added.