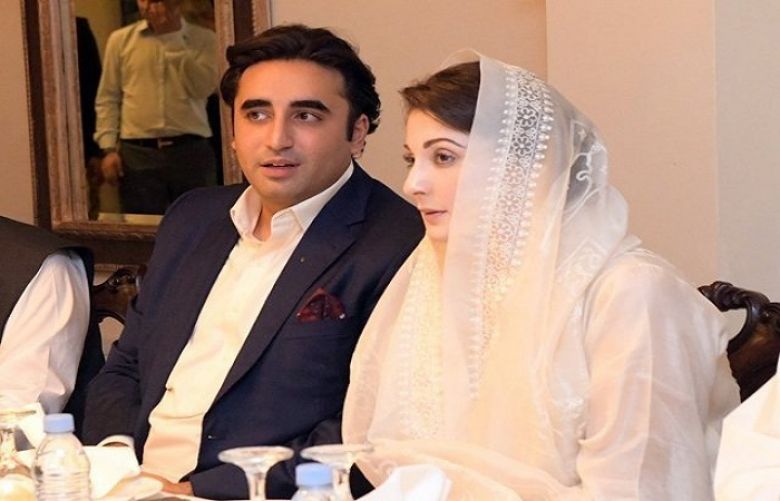 PML-N vice president Maryam Nawaz lashed out at PM Imran Khan on Thursday, claiming that his support was dwindling within the PTI.

PPP chairperson Bilawal Bhutto-Zardari and the PML-N vice president had earlier met to discuss political developments as the Senate elections loom near and the Pakistan Democratic Movement (PDM) gears up to give the government a tough time in the polls.

Maryam spoke highly of the PDM's joint candidate from Islamabad, former prime minister Gillani. "Yousaf Raza Gillani is not only the PDM's candidate but he has an affable personality," she said, adding that the PML-N fully backs him as its joint candidate for the Senate seat.

Referring to the upcoming Senate elections, Maryam said that "there is a line on which one side, democratic forces stand and on the other, those who are guilty of crimes against the nation".

In response to a question, Maryam said that it is never news when the establishment does not involve itself in politics. "In my opinion, if they are not involved in politics, then it is better for not only them but also for our institutions and for democracy in the country," she said.

The PPP chairperson said that the government had suffered defeats in the recent by-elections, from Pishin to Sialkot. "The people have rejected them in every by-election," he said. "I believe two decisions taken by the PDM — one to contest the by-elections and the other to partake in the Senate polls — have completely changed the political situation and has made the government anxious," added Bilawal.

The PPP leader said that the PDM was not bringing about a no-confidence movement against the government at the moment and was only contesting the Senate elections.

"We [PDM] took the decisions to contest the by-elections and the Senate elections together. When it comes to sending this government home, we will also decide as to when we will do that, through consensus," he added.

In response to a question, the PPP chairperson said that the PDM was contesting an election and its constituency was the parliament.

"Yes, we are in contact with every member of the parliament and are trying to get them to vote for our candidates," he said.

Bilawal said that the PDM believed in the Constitution and in the principal that each democratic government should complete its constitutional tenure. However, he said that the current system was an unjust one where political allies of the incumbent government were "tied together" to it by force.

The PPP leader condemned the arrest of Khursheed Shah and Leader of the Opposition in the National Assembly, Shehbaz Sharif.

PM Imran Khan has spoken in favour of holding an open ballot in the upcoming Senate elections, accusing the Opposition parties of seeking to bribe lawmakers to vote for candidates other than those of the PTI.

When asked to comment on the Opposition saying that the government is "threatened that their MPAs are striking deals" ahead of the Senate polls March, and which is why it has opted for open balloting, the prime minister had recalled his stance at the time his government came into power in Khyber Pakhtunkhwa.

"When our government was formed in KP in 2013, in the first Senate elections, there were offers made to MPs and I told them that if you are going to sell your votes, then we will dissolve our assembly," PM Imran Khan had said.

"In 2018, (after coming into power) we found out 18 or 20 members had done this and we dismissed them from the party. It was then that I said [the polls] should be based on an open ballot," he continued.

The premier had also responded to the Opposition's hue and cry over the open ballot Ordinance having supposedly sprung out of nowhere.

"Our petition was lying for five months in parliament and they say we brought it all of a sudden," he had said.