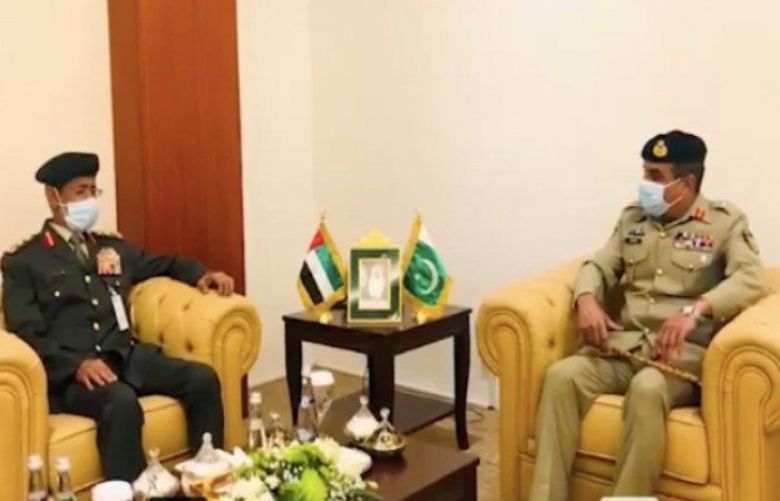 Pakistan and the United Arab Emirates have discussed various areas of interest, bilateral cooperation including security, counter-terrorism, and the prevailing regional environment particularly with reference to Kashmir and Afghanistan, a statement by the Inter-Services Public Relations (ISPR) said on Wednesday.

According to the statement, Chairman Joint Chiefs of Staff Committee (CJCSC) General Nadeem Raza, who is on a two-day official visit to the UAE, called on the Chief of Staff UAE Armed Forces, Lieutenant General Hammad Mohammed Thani Al Rumaithy.

“The dignitaries also dilated upon measures to enhance the level and scope of military engagements between both countries and reaffirmed their commitment to continue forging deeper strategic ties,” read the ISPR statement.

He also visited the stalls established by different organisations from Pakistan as well as the participating Pak Naval Ships.

Gen Raza lauded the efforts of the participating organisations in showcasing Pakistan’s indigenously-manufactured, defence-related equipment at a global level.

On the sidelines of the exhibition, Chairman JCSC also called on General Enzo Vecchiarelli, Italy’s Chief of Defence (CHOD).

During the meetings, CJCSC said that Pakistan's defence manufacturing sector is capable of meeting the bulk requirements of foreign customers in the select areas of medium to high-end technologies.

He also held separate meetings with all chiefs of tri-services.