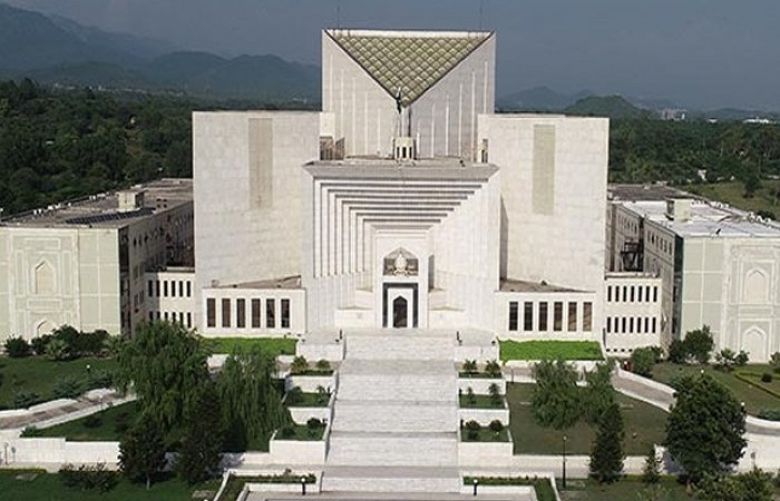 Chief Justice of Pakistan Gulzar Ahmed on Wednesday said that the parliament is the forum that must decide the method of voting for Senate elections, including the degree of secrecy to be allowed.

- Does Article 226 of the Constitution apply to Senate elections or not?

- Could there be a single transferable vote in the Senate election through proportional representation or not?

- Under Article 226 of the Constitution, are all elections held by secret ballot or not?

The chief justice said that besides these, all matters must be deliberated in parliament, including which method of voting to implement.

Counsel for the Sindh High Court Bar Association (SHCBA), Barrister Salahuddin, said the government is "dumping its political responsibilities on to the court".

Salahuddin said an amendment bill on open balloting has been pending in parliament.

He said arguments made by the Attorney-General for Pakistan Khalid Jawed Khan were not based on what the Constitution is, rather on what it should be.

"The attorney-general spoke of bags full of money and videos on which the court could not provide a ruling. The government had originally approached the court to seek an opinion but no opinion was taken," he said.

He said the attorney-general, as well as the advocate generals from all the provinces, spoke in favour of open balloting, but none sought the court's opinion.

"It seems the government is not interested in an opinion. It only wants the open balloting method to be ratified," said the barrister.

Recommending that the court not get involved in such matters, Salahuddin said that in the past, references were filed due to a gap in the Constitution, whereas now, no such void exists.

He said in the past, the Supreme Court of Pakistan kept itself distant and declared that it was up to the parliament whether or not to recognise Bangladesh as a state, after the partition of West Pakistan.

The barrister also cited the example of the Babri Mosque's demolition. He said the Indian government had sought the opinion of the court on the future of the site but the court in 1992 had wisely refused to taken upon itself such a burden.

The chief justice said that the Supreme Court will only respond to the questions asked in the presidential reference on the matter.

"If the Constitution says there must be secret balloting then that's the end of the matter," he said.

"The Supreme Court is not a substitute for the parliament," he added.

CJP Ahmed said that every state institution has to operate within its limits. "We will not take matters the parliament is authorised to carry out into our own hands," he said.

Barrister Salahuddin said the Constitution is silent on the National Assembly Speaker's elections and the details are only available in the election rules.

He said that even then, if the Speaker's election can be held in accordance with the Constitution, then why not the Senate elections.

Salahuddin said the Constitution makes no mention of ballot papers. He asked whether the end of the Election Act 2017 would mean an end for Senate elections.

The chief justice remarked that the law "never has a void". "When any law is abolished, the one that was in place before it, becomes the law."

The case was adjourned till Thursday, February 25. "We will individually listen to all those who are party to the case tomorrow," the chief justice said.