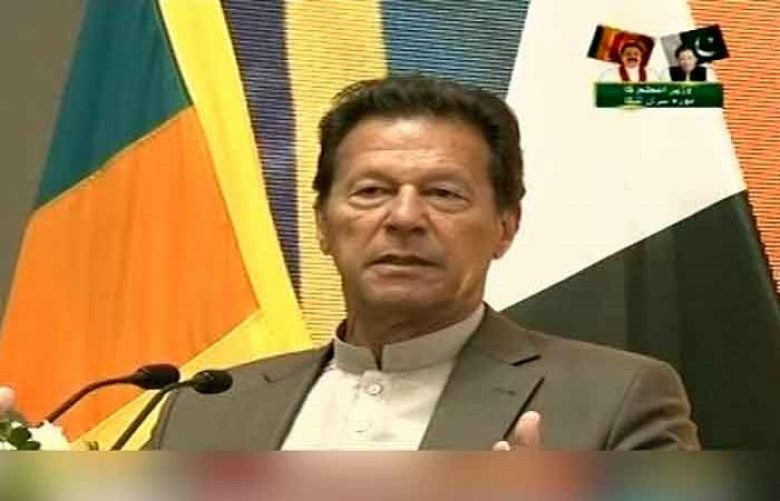 Prime Minister Imran Khan on Wednesday said that Kashmir is the only dispute between India and Pakistan, adding that it can only be resolved through dialogue.

The prime minister made these remarks while addressing the Pakistan-Sri Lanka Trade and Investment Conference in Colombo, which he co-chaired with his Sri Lankan counterpart Mahinda Rajapaksa.

The conference was organised in a bid to explore avenues of collaboration in diverse fields between the two counties.

The prime minister, who is in Colombo on a two-day official visit, said political stability in the region — by maintaining good relations with neighbouring countries — ensured a business-friendly environment that resulted in the people's overall development.

PM Imran Khan said he offered the Indian government a chance to holds peace talks with Pakistan after getting elected but nothing came out of it, adding that "our only dispute is on Kashmir and it can only be resolved through dialogue."

He underscored the importance of peaceful resolution of differences, saying "we want to resolve all disputes in the subcontinent through dialogue.”

The prime minister said that Pakistan can play a role in bridging the gap between China and the United States.

“Terrorism has affected both Pakistan and Sri Lanka and counties in the region can end poverty by establishing trade relations.”

He also suggested the formation of a bloc along the lines of the European Union to promote trade.

The prime minister said Pakistan and Sri Lanka could explore the idea of generating wealth through joint business activities and diverting the wealth to alleviate poverty.

PM Imran Khan offered the Sri Lankan businessmen to explore the immense opportunities offered by the government of Pakistan in the form of ease-of-doing business.

The conference that currently undergoes in the capital of the island nation featured investors and businessmen from the two countries.

In line with Prime Minister Imran Khan’s vision, he said Pakistan is ensuring ease-of-doing business, particularly in the housing and real estate sectors to promote growth.

“We want to make Pakistan an economic hub with a focus on peace, development and activity,” he said, adding that the China-Pakistan Economic Corridor would lead towards prosperity for the entire region.

He invited the Sri Lankan businessmen to explore and benefit from the business opportunities offered by the government of Pakistan.

Commerce Minister Abdul Razzak Dawood said the existing trade volume between Pakistan and Sri Lanka did not commiserate their friendly relations and thus needed a thrust in their bilateral economic strategies.

The Sri Lankan state minister for commerce said Pakistan and Sri Lanka could cooperate to fill the resource gap keeping in view their friendly relations.

He proposed a joint collaboration between industries of the two countries, besides engagement at people-to-people level in the field of education and health.

He lauded Pakistan’s change in focus from geo-strategic level to geo-economics, adding that Sri Lanka was ready to collaborate for South-South partnership in areas including pharmaceuticals.