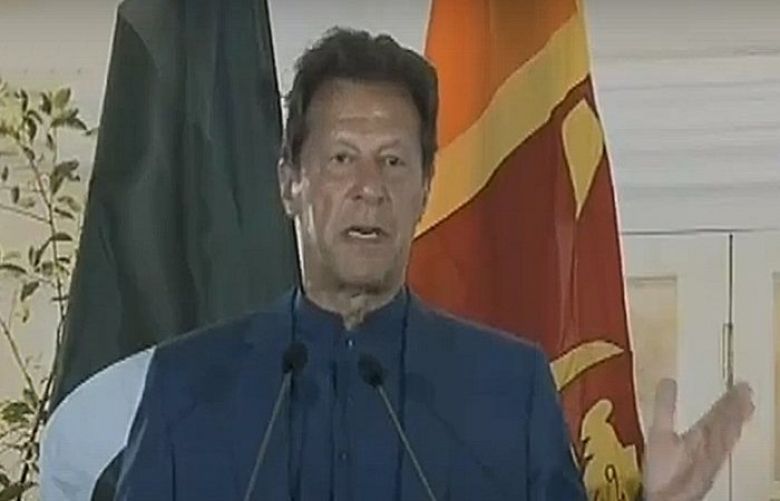 In a joint press conference with his Sri Lankan counterpart, PM Imran Khan spoke about his first visit to the country, saying it was when "I was starting my cricket career".

The premier underscored that Pakistan and Sri Lanka were facing issues such as terrorism. "Pakistan has been the victim of the worst terrorism for ten years, sacrificing 70,000 lives" over the past decade," he stated.

PM Imran Khan invited Sri Lanka to promote its economic and regional ties through Pakistan. "Through the CPEC [China–Pakistan Economic Corridor], economic ties can be extended to Central Asia and Sri Lanka," he said.

Pakistan is an "important component" of the CPEC, which he said would "open new avenues for the development of regional ties".

PM Mahinda Rajapaksa thanked the premier for Pakistan's cooperation in the field of sports.

The two leaders also affirmed the resolve to strengthen relations in diverse areas in the meeting held at Temple Trees — the Sri Lankan prime minister's office — and focused on strengthening ties in areas of trade and investment, health and education, agriculture, science and technology, security, culture and tourism.

Earlier in the afternoon, PM Rajapaksa received PM Imran Khan on the latter's arrival here at the Bandaranaike International Airport, where he was also given a guard of honour upon his arrival.

The Pakistani premier is the first head of state to visit Sri Lanka after President Gotabaya Rajapaksa and PM Rajapaksa assumed office last year, indicating the importance both countries attach to their important relationship.

PM Imran Khan is undertaking the two-day official visit to the island nation on the invitation of his Sri Lankan counterpart. He is accompanied by a high-level delegation, including members of the Cabinet and senior officials.

He was expected to also participate in a joint ‘Trade and Investment Conference’ aimed at promoting trade and investment between the two countries.

A number of memoranda of understanding (MoUs) to enhance bilateral cooperation would be signed during the visit.