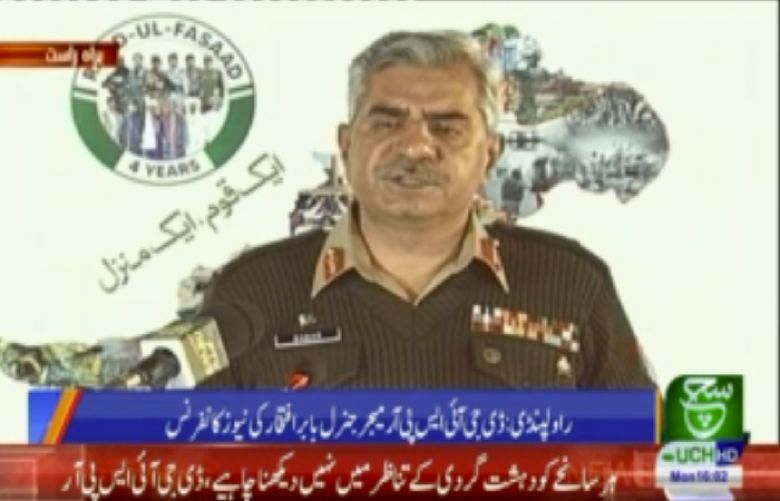 Addressing a press conference on the eve of completion of four years to Operation Radd-ul-Fasad DG ISPR said that the operation kicked off on February 22, 2017, to restore peace and stability across the country.

Radd-ul-Fasad was initiated at the time when terrorists were targeting innocent people across the country and were trying to take shelter.

Detailing the success of the operation, Major General Babar Iftikhar said more than 3,75000 operations were carried out across the country under Operation Radd-ul-Fasad including over 150,000 in Sindh, 3,4000 in Punjab, more than 80,000 in Balochistan and over 92,000 in Khyber Pakhtunkhwa.

Major General Bajar Iftikhar maintained that the law and order situation in Karachi improved after the operation.

All the state institutions played their role in the operation and the network of the terrorists was destroyed after the untiring efforts of the intelligence agencies.

During the operation, more than 5,000 terrorists were killed and more than 72,000 weapons were seized by the law enforcing agencies.

Furthermore, 344 terrorists were handed over the death penalty during the period out of which 58 have been executed. Action against more than 78 organizations and terrorists was carried out. “Assets of the outlaws were frozen.”

On Pak-Afghan Border crossing, Pakistan Army’s spokesperson said that about 83pc fencing of 2611 kilometers long border has been completed. 497 forts have been established.

As many as 1684 cross-border firing incidents were reported from the Afghan side, the DG ISPR said.

He further said, 37, 428 policemen will be deployed in tribal districts after training to maintain law and order. Now the world is acknowledging Pakistan Army’s success in clearing the tribal areas from terrorists, DG ISPR said and added that the journey from terrorism to tourism was not that easy.

Pakistan Army will control every situation with the support of the masses.