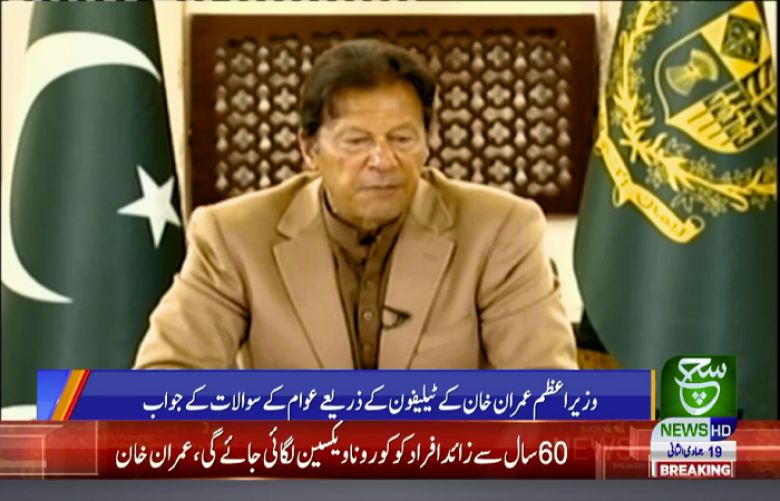 Prime Minister Imran Khan on Monday assured citizens that Pakistan was "on its way to becoming a great nation", saying that every area in the country had a special quality that could be developed to its advantage.

The premier made these remarks while answering the public's questions via telephone, in the first such session since he assumed office in 2018.

The first caller, a person from Sahiwal, asked Prime Minister Imran about the government's strategy to vaccinate the population against Covid-19. Outlining the government's plan, the premier said that in the first phase, frontline health workers, especially those treating coronavirus patients would be vaccinated.

After that, citizens who were over 60 years of age or those with pre-existing conditions that made them more vulnerable to Covid-19 would be vaccinated, followed by the general public.

"Rich and poor will not matter. We will try to cover as many people as possible," he stressed.

In response to a question by another citizen, the premier said that every area of Pakistan has a "certain advantage" that can be developed for its benefit. Elaborating on his statement, he said that Gilgit Baltistan could never be an industrial hub similar to Karachi and Sialkot but it could become a hub for tourism.

Citing the example of Switzerland, he said the country was "half the size of our Northern areas yet every year it earns $80 billion from tourism", comparing it to Pakistan's exports, which he said amounted to $25bn annually.

"GB is twice [the size] of Switzerland and has taller mountains. If we concentrate on tourism then the whole area can become prosperous like never before. I have talked to the [GB] chief minister, we have to make it a tourism hub."

Talking further about the region, the premier said the government was setting up a grid station in GB and would also set up hydroelectricity plants. "We have also planned roads which will open the area for tourism."

He said this would lead to "so much prosperity in the region that people [currently] leaving GB for jobs elsewhere would not have to do so".

Moving on to Balochistan, he said the province was sparsely populated and the distances between residential populations were "too vast so development is not easy".

"Balochistan's political setup has also damaged its people and caused harm." The premier said that a local government system was needed so the money would "[trickle down] to the villages instead of remaining with the people at the top".

Prime Minister Imran noted that south Balochistan had been "left even more behind" but the PTI government had announced the "biggest package in Balochistan's history" for its development.

"We have given internet connectivity [and] it has become a source of development. Many areas did not have 3G and 4G [services] but the reason for that was terrorism.

"We have decided to [make 3G and 4G services operational] for our youth in far-flung areas and tribal areas so people have connectivity".

He urged the people to "have some patience", saying the government wanted to develop far-flung areas that had been left behind but had limited resources.

"Nothing hurts us more than [the prophet's] disrespect but the West does not understand this." He described his own efforts to combat Islamophobia, saying he had raised the issue in the United Nations and the UN General Assembly and then jointly raised it for a third time along with Malaysia's Mahathir Mohamad and Turkish President Recep Tayyip Erdogan.

"Until heads of Muslim countries come together and agree [to tackle it], the issue will not be solved. This is a struggle we have to continuously do and I fully believe we will be successful."

In response to another caller, the premier explained why the government had decided to launch the Naya Pakistan Housing Project (NPHP).

Comparing the conditions in the United States and Europe, he said that "80 per cent of people in those countries took loans to buy houses, 30pc of people in Malaysia while only 0.2pc of people in Pakistan" did the same.

Talking about the changes the government had brought into the system, he said: "It took us two years in the courts to clear the stuck [foreclosure] law. Now that this obstacle has vanished, the banks can give loans.

He said that after the government's subsidies, people would take loans to build houses and the money they had previously paid for rent would now go towards paying their instalments.

"The project has started and slowly people and banks are understanding it. Now banks are themselves advertising that people should come and take loans from them," he said, adding that this would give an opportunity to salaried people and labourers to build their own houses.