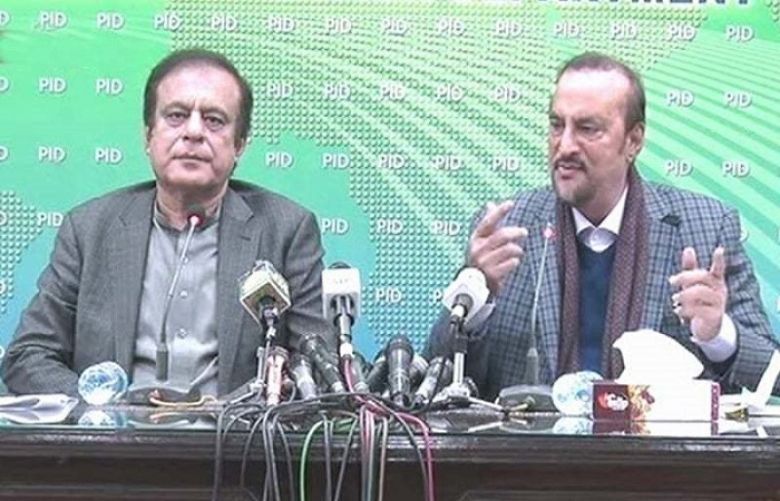 The PTI government has vowed to "pay whatever price needs to paid" to ensure that the upcoming Senate elections are transparent and no vote-buying takes place by introducing amendments to three articles of the Constitution, government officials said on Thursday.

Addressing a press conference in Islamabad alongside PM's aide on parliamentary affairs Dr Babar Awan, Information Minister Shibli Faraz emphasised that the government was willing to "pay whatever price needs to be paid" to introduce the amendments, saying the government's purpose for the move was to ensure transparent and fair elections.

Faraz recalled how the PTI government had expelled several members of the provincial assembly (MPAs) from Khyber Pakhtunkhwa after it emerged they had sold their votes during the 2018 Senate elections.

"We removed 20 sitting MPAs from our government in KP because there was a doubt that they used their vote incorrectly and some transactions happened that were unacceptable. Only the PTI and Prime Minister Imran Khan could have removed sitting MPAs. We have not seen such an example in the past or in the present".

He said the government was ready to "make all required legal efforts" to ensure that the 2021 Senate elections were free and transparent. He termed it an opportunity for the opposition parties to cooperate and "make [the efforts] successful".

The information minister pointed out that the concept of open ballots was also present in the Charter of Democracy — an agreement signed between the PPP and the PML-N in 2006 — and said that it was "time for implementation".

Speaking after Faraz, the PM's adviser Dr Babar Awan said that the government has readied a "package to bring three reforms in the Constitution" after great efforts and several meetings with Prime Minister Imran.

He said the government had received information that "rates have been set" for buying votes in the Senate election, saying the amendments would be a test case for "all political elites of Pakistan in the parliament".

Every party wanted transparent elections but no one had the "courage" to introduce constitutional reforms for it, Awan said, adding it was because it "suited an incumbent government to buy votes to increase its seats".

Include the word Senate in Article 226 of the Constitution

Awan said the premier stressed during the latest meeting that he was "not concerned whether [the PTI's] seats in the government increase or decrease", instead his concern was accountability.

Sharing details of the bill the government plans to introduce in parliament at the start of next week, the PM's aide said that the first amendment would replace 'single transferable vote' in Article 59(2) of the Constitution with 'open vote'. Thus, the Senate voting process would no longer remain secret, he added.

Secondly, Article 63(1)(c) which is related to disqualifications for membership of parliament would be amended to allow overseas Pakistanis and Pakistanis with dual nationalities to contest elections.

"Overseas Pakistanis work across oceans and their earnings are Pakistan's biggest assets but nothing has been done for them. After this, all overseas Pakistanis, despite dual nationality, will be able to stand for elections."

However, they would be required to renounce their citizenship of the foreign country before taking the oath of office, he clarified. If the person loses the election, this condition will not be applicable.

He congratulated overseas Pakistanis, saying the government was going to parliament next week to "open the way for them".

Thirdly, he said, the government would amend Article 226 of the Constitution to include the word Senate in it so elections could be held through open ballot.

Awan said that "traders have started setting rates for the first time in Punjab" for the Senate elections, adding that previously, it had only happened in smaller provinces.

Awan said the constitutional amendment bill was a "test case" for political parties and would identify their stance on holding transparent elections.

Referring to the PML-N and PPP's Charter of Democracy, he said that Article 23 of the charter stated: "To prevent corruption and floor-crossing, all votes for the Senate and other indirect seats will be [held through] open and identified ballots".

When the bill is moved in the parliament, it would "identify those who want to buy votes", he said, claiming that the opposition parties would not support it.

Talking about the the presidential reference regarding Senate elections, which is being heard in the Supreme Court, he said that the parties who had "run away from it have [actually] run away from their agenda and charter. They have run away only to either make money or put money."

Headed by Chief Justice Gulzar Ahmed, a five-judge Supreme Court bench, which is hearing the presidential reference seeking the court’s opinion whether the condition of secret ballot under Article 226 of the Cons­titution applies to the Senate elections or not, had solicited synopsis from each province, the Election Commission of Pakistan (ECP) and individuals interested in the matter.

Awan termed the proposed amendments a "national slogan" and an "agenda for the entire democracy".

He invited the opposition to participate in the legislative process related to the amendments, saying "parliament is the place we can make Senate elections, free, fair and transparent".