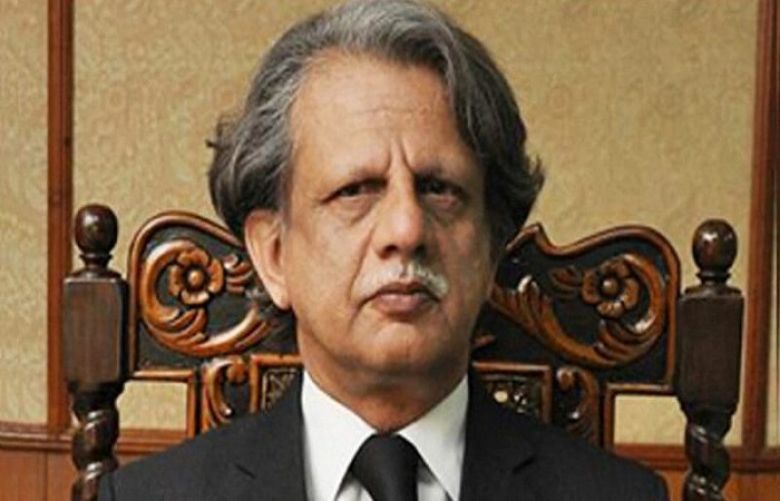 The PML-N and PPP on Friday rejected the government's move to appoint retired Supreme Court judge Azmat Saeed Sheikh as head of the Broadsheet inquiry committee, citing his past affiliation with the National Accountability Bureau (NAB) as creating a "conflict of interest".

"Handing over investigations those who should [themselves] be investigated is the murder of justice. [Prime Minister] Imran Khan, have the courage to tell the nation you need a NRO (National Reconciliation Ordinance)," said PML-N spokesperson Marriyum Aurangzeb.

The statement said the appointment of the retired judge was a "big fraud" and "controversial" since Justice Sheikh had served as deputy prosecutor general of NAB during the original signing of the Broadsheet agreement and was one of the negotiators in the deal along with being a senior legal officer at the time.

The statement further said Justice Sheikh also served as a member of the board of governors of the Shaukat Khanum Hospital, adding that this showed PM Imran's "ill-intent" behind handing over the Broadsheet inquiry to him.

"How can the investigation conducted by the former deputy prosecutor general be transparent and fair?" questioned the statement, adding that "being a legal officer, he [Justice Sheikh] had fully understood the document of agreement with Broadsheet."

She further alleged that the as deputy prosecutor general, Sheikh had also been tasked with making cases against PML-N supremo Nawaz Sharif during Pervez Musharraf's era. Therefore, she said, "no one should be a judge in his own case or in the case of those with whom he has a relationship or conflict [of interest]."

"The nation wants accountability for those who loot and squander their earnings, sprinkling salt on the wounds is not a joke," said the statement.

Meanwhile, PPP Secretary General Nayyar Bukhari said that the appointment of the former judge had exposed the government's dishonesty, adding that the purpose of appointing Justice Sheikh was to cast all blame "on the opposition and previous governments".

He said the PPP was also concerned over the appointment due to the ex-judge's past affiliation with NAB and the Shaukat Khanum hospital. Investigation of the Broadsheet case under such circumstances is tantamount to "throwing dust in the eyes of the people," he said in a statement.

"Broadsheet is a very important issue [so] we want a transparent investigation," he said.

Justice Sheikh was appointed as the head of the inquiry committee to probe the issue of UK-based asset recovery firm Broadsheet LLC. The federal cabinet in its meeting on Jan 19 had decided to form a new inquiry committee on the recommendation of an inter-ministerial committee that had earlier been constituted by the prime minister to look into the Broadsheet saga.

Broadsheet LLC, a UK company that was registered in the Isle of Man in the Pervez Musharraf era, helped the then government and the newly established NAB track down foreign assets purchased by Pakistanis through alleged ill-gotten wealth.

Broadsheet claimed that it was established to enter into an Asset Recovery Agreement dated June 20, 2000, and did so with the then president of Pakistan, through the NAB chairman, for the purposes of recovering funds and other assets fraudulently taken from the state and other institutions, including through corrupt practices, and held outside of Pakistan.

Broadsheet maintains that it was created to be a company specialising in the recovery of assets and funds, and was therefore engaged to trace, locate and transfer such items back to the state.

After NAB terminated the contract in 2003, Broadsheet and another company involved as a third party filed for damages, saying Pakistan owed them money according to the terms agreed upon since the government was taking action to confiscate some of the assets they had identified, including the Avenfield property owned by the Sharif family.