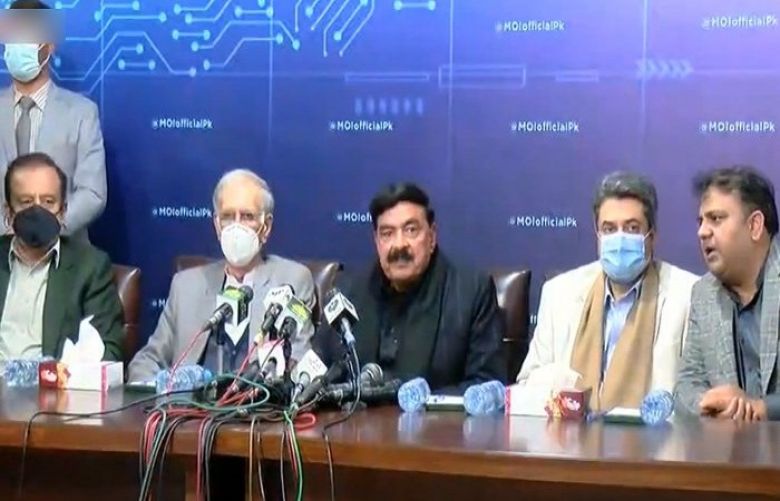 Ahead of PDM's scheduled sit-in outside the Election Commission of Pakistan (ECP) on January 19, the federal ministers urged the 11-party Opposition alliance to not take the law into their own hands.

Rasheed, speaking during the press conference, said that in the meeting the ministers exchanged views on the law and order situation in the country. "We hope that the Opposition does not negatively affect law and order during its protest outside the Election Commission of Pakistan," he said.

The minister remarked that the 11-party alliance, PDM, is now going to partake in the upcoming Senate polls — an election which they were previously against.

The law minister, Farogh Naseem, citing the Supreme Court's remarks in the Faizabad sit-in case, said that it was made clear that not every place is feasible for protests.

"The state will protect your rights within the law," he said.

Meanwhile, the science minister, Fawad Chaudhry, slamming the Opposition, said that they had criticised every state institution — and had not spared even a single one.

Rasheed, continuing further, said that Pakistan's politics had not reached a dead end and that it had come out on the battlefield.

Responding to a question, he said that the Islamabad police's attitude would change for the better.

'We will serve halwa to Maulana'

The railways minister, warning PDM chief Maulana Fazlur Rehman, said that he should refrain from chanting slogans that incite hatred.

Talking about madressahs, he said that a committee had been made that comprises Federal Minister for Religious Affairs and Inter-faith Harmony Pir Noor-ul-Haq Qadri and him.

"We consider religious forces to be the beacon of Islam," Rasheed added.

Later, speaking to the media, Information Minister Shibli Faraz said that Maulana (Fazlur Rehman) "does not eat pizza; we will serve him halwa (a sweet dish)".

"Staging protests in Islamabad is allowed and the prime minister has tweeted in this regard as well," he said.

"There will be no obstacles in the way of PDM's protest on January 19," he said, adding that specific spots should be marked for protests.