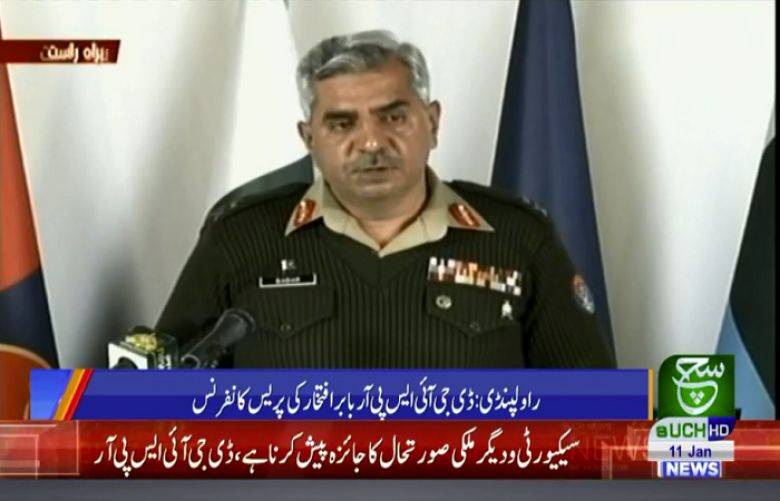 Major General Babar Iftikhar said that he is holding the press conference to highlight the latest situation of the country’s security. He said that in 2020, locust invasion and coronavirus pandemic have created difficulties alongside security challenges to the country.

He said that the state, national institutions, armed forces and the nation become united to coup with the challenges. The DG ISPR said that the overall security situation of the country has improved and comprehensive steps were taken to secure borders with Afghanistan and Iran.

The spokesperson to military’s media wing said that on one side, India was continuing violations of the ceasefire line and on the other side, banned outfits were carrying out activities along Eastern border of the country.

Iftikhar said that the country has always spotted facts regarding internal and external threats besides timely responding it. Following the efforts, no organised terrorist infrastructure exists in Pakistan today.

371,000 operations had been conducted in the last three years under Radd-ul-Fasaad and the armed forces had successfully eliminated the illegal arms and ammunition. The tribal areas are now a part of Khyber Pakhtunkhwa (KP) province and the rate of the terrorist incident was reduced up to 45 per cent in 2020 as compared to the last year.

“Security institutions have foiled more than 50 per cent of terrorist incidents. In 2013, Karachi was standing at the sixth number in crime index which is now 103.”

Iftikhar said that the number of ceasefire violations (CFVs) by India recorded highest in 2019 up to 3,097 times on eastern border especially the Line of Control (LoC). Pakistan Army had responded to the Indian provocations in a befitting manner.