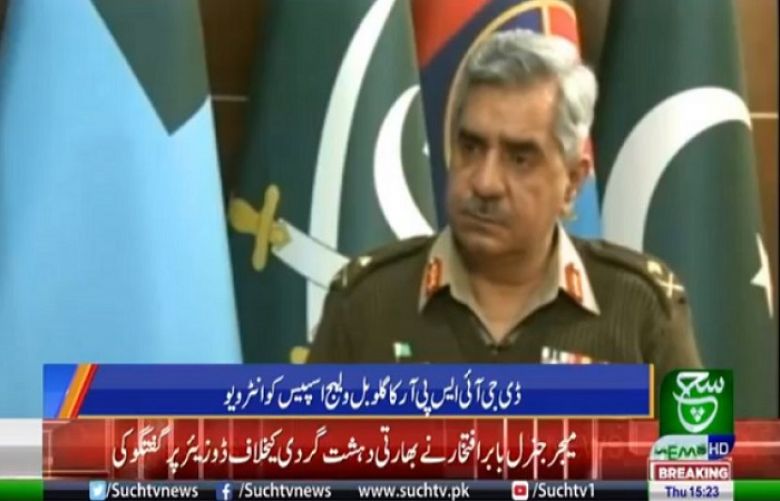 During an exclusive interview with the Global Village Space (GVS), the DG ISPR highlighted the key points of the dossier that Pakistan recently prepared to prove India's involvement in terrorism across Pakistan.

"The world is now talking about India's state-sponsored terrorism after the dossier was released," he said. "The international community has taken the matter very seriously."

Maj Gen Iftikhar said that despite Indian efforts to come clean, the matter is now being openly discussed at international forums and media.

"Pakistan presented the dossier at the UN to let the world know about India's activities in Pakistan. We will not stop here and will take this issue further across the globe," he stressed.

He also shed light on the ongoing situation at the Line of Control (LoC) and the China-Pakistan Economic Corridor (CPEC).

"India has been using the Afghan territory to launch terrorist activities in Pakistan. We keep talking to the Afghan leadership regarding the issue, but we do not blame them because we recognise Afghanistan's lack of capacity to deal with the problem," Gen Iftikhar said.

He added that India has repeatedly targeted local labourers and the Chinese manpower working at different CPEC projects.

"Pakistan is fully prepared to deal with these threats. We are tackling all the challenges," he assured.

The DG ISPR also informed GVS that the state has formed two special division forces to ensure the security of the CPEC projects, adding that nine regular regiments have already been deployed to look after the Corridor.

"Our Chinese partners are satisfied with the security arrangements," he said.

Answering a question about disinformation on social media, Maj Gen Iftikhar said that it has been a major challenge.

"The best way to handle [fake news disseminating] on social media is transparency, not leaving any information voids, and passing on credible information. That is exactly what we are doing," he said.

"[These social media tactics and disinformation campaign to malign Pakistan] is a major onslaught. It is a major part of the fifth-generation warfare against Pakistan and we are aware of that."

He said that in its fifth-generation warfare, India has been targeting Pakistan in the diplomatic, economic, and information domains.