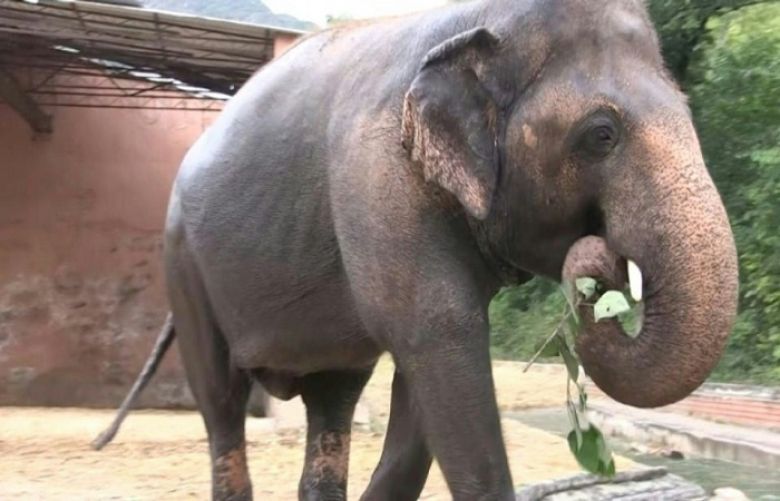 File Photo Kaavan sets out on excursion to Cambodian safe-haven

Pakistan’s loneliest elephant, Kaavan, departed for Cambodia in the wee hours of Monday on a special chartered cargo plane from Russia.

A ten-member team, comprising veterinarians and technicians, accompanied the 35-year-old bull elephant on a long journey from Pakistan to a Cambodian sanctuary. On Sunday morning, Kaavan was sedated before being shifted into a special cage in which it was transported to the Islamabad airport.

The plane with the pachyderm on board was to depart yesterday but its departure was delayed by about 10 hours due to India creating obstacles to the elephant’s smooth, non-stop transportation to Cambodia.

Adviser to the Prime Minister for Climate Change Malik Amin Aslam said India should desist from its policy of hatred in the matter involving an animal’s rescue. He demanded of the Indian authorities to allow the plane carrying Kaavan to use the country’s airspace without making any stopover.

He said a reception committee would be ready at the Cambodian airport to receive Kaavan. Initially, a 10-acre area would be given to the elephant where the animal could see other elephants.

It is worthwhile to mention here that renowned pop star and animal rights activist Cher visited Pakistan to see the elephant off.

Kaavan was brought in Pakistan back in 1985 as a gift from Sri Lanka when he was one-year-old, whose inappropriate living conditions in Marghazar Zoo had irked onlookers as he remained chained and that, too, in a tiny enclosure.

Back in May this year, the Islamabad High Court decreed relocation of Kaavan since he was treated cruelly by the authorities concerned. Kaavan’s plight was given a boost over the years by American pop icon Cher, who publicly campaigned for the elephant’s relocation.