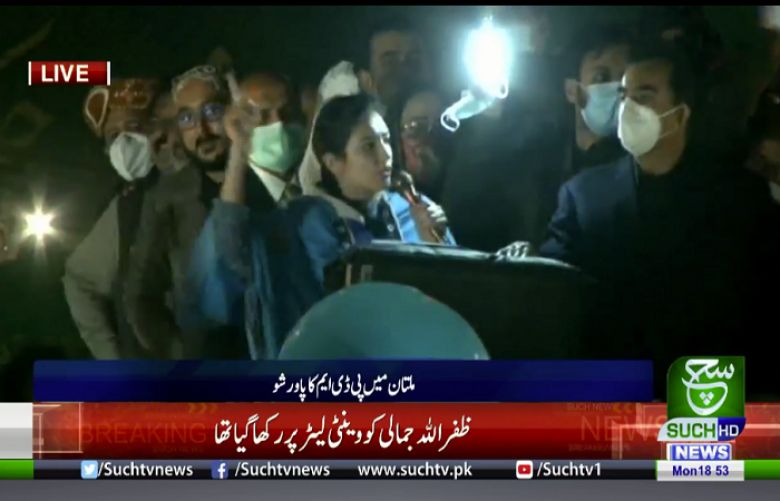 Efforts to scuttle the Opposition's Pakistan Democratic Movement from holding a rally in Multan on Monday largely failed to bear fruit as top party leadership, accompanied with a large number of supporters converged at a makeshift location, where PPP's Asifa Bhutto-Zardari made her PDM debut.

Asifa delivered a short and brisk speech. She vowed to stand by her brother, PPP chairman Bilawal Bhutto-Zardari "every step of the way".

She said those who think the Opposition will be cowed into submission are mistaken.

Asifa said that the people had announced their decision and that they wanted PM Imran Khan to "pack up and leave".

Speaking about her mother, she said Benazir Bhutto had carried on her father's mission — to establish a welfare state — and faced several setbacks.

She promised PPP workers that she would continue their mission and would not back down.

"They think that we are afraid of arrests. If they arrest our brothers, then they should know that every woman of PPP is ready to take up the struggle," she said.

Maryam Nawaz, addressing the rally, said that when she entered Multan, the entire city was already transformed into a rally venue.

Addressing the government, she said that because the rally venue was sealed, the people of Multan have turned the streets and the neighbourhoods of the city into the jalsa venue.

The PML-N vice-president said that when the country faces a threat, then its daughters and mothers come out on the streets to save it.

A fire was seen in the backdrop, near the Ghanta Ghar Chowk, as Maryam spoke.

It was unclear what had caused the fire to erupt.

Referring to the passing of her grandmother Begum Shamim Akhtar, who died in London on November 22, Maryam said that her father, former prime minister Nawaz Sharif, told her to go to the people of Multan as the family’s grief pales in comparison to that of the people.

“We know the grief of losing a job,” she added. “We realise that you are saddened by a cold stove [due to low gas pressures].” She said the rising costs of electricity and gas are bringing sorrow to people’s homes.

In the absence of arrangements at the original venue — Qila Kohna Qasim Bagh stadium — due to a tussle for control of the stadium between the government and the Opposition's party workers, Multan's Ghanta Ghar Chowk was turned into the rally venue with a makeshift stage installed.

Asifa landed in Multan Monday morning and headed straight to Gilani House. She is standing in for PPP chairman and brother Bilawal Bhutto Zardari who is self-isolating after testing positive for coronavirus last week.

Accompanied by Marriyum Aurangzeb, Maryam Nawaz reached later as the movement of her convoy was hampered by the flood of people surrounding her vehicle. Both stood on the roof of the car as it crawled towards the destination.

Gilani thanks govt for containers

The government tried to stop this rally and despite all the hurdles, it will take place. "I would like to thank the government for providing us with containers," he said, referring to PM Imran Khan's promise of providing containers and food to the Opposition if they wish to hold demonstrations.

Gilani said that the PPP, in their bid to empower the people of South Punjab, had given key government positions to them, including the minister, foreign minister, governor, among others.

"[South Punjab] needs to be converted into a separate province as it is necessary for its development," he said.

In a surprise move, Punjab Inspector-General of Police (IGP) Inam Ghani has ordered against preventing Pakistan Democratic Movement leaders from leading rallies in Multan. The police chief has also ordered removal of all barriers in the way of political workers belonging to the Opposition.

'Jalsa to be held, come what may'

Pakistan Democratic Movement (PDM) chief Maulana Fazlur Rehman and other opposition leaders vowed on Sunday to go ahead with their plans of a public meeting at any cost.

Addressing a crowded press conference at Jamia Qasimul Aloom after a crucial PDM meeting in Multan, the Maulana said the government was resorting to state terrorism in the form of mass arrests, police raids and snatching the right to freedom of movement from the opposition parties.

“Enough is enough,” he had warned the government, asking it to stop the use of force against the PDM workers.

PPP chairman Bilawal Bhutto-Zardari also warned the government to desist from carrying out a crackdown against PPP workers in Multan and other parts of Punjab "otherwise there will be protests in every nook and corner of the country".

Bilawal said the Foundation Day rally will be held "anyhow" and PPP and other PDM parties "won't be cowed down by the highhandedness of the regime".

On Sunday, the Multan district administration, with the help of police, expelled all opposition parties’ activists from the Qasim Bagh Stadium, the public meeting venue, and put locks on its gates once again.

A day before that, the PDM parties’ activists had broken the locks and occupied the stadium despite repeated warnings from authorities to not do the same.

Former prime minister Yousaf Raza Gilani's son Ali Qasim Gilani and other activists were arrested by Multan Police for defying the law and cases were registered against hundreds of opposition parties’ activists.