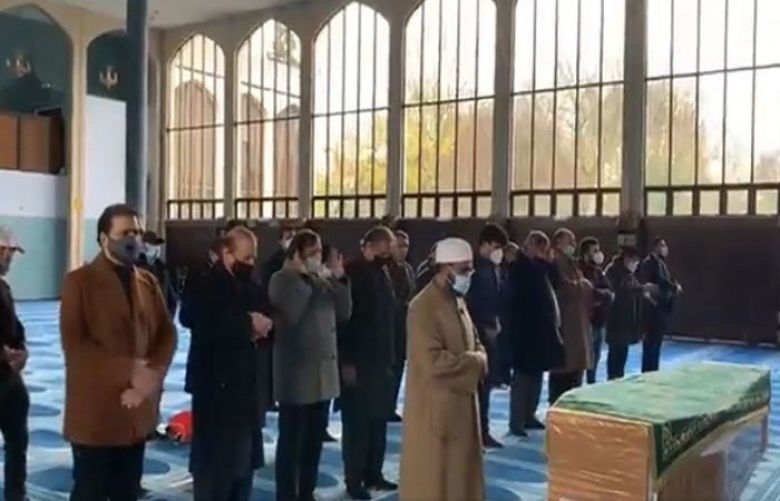 PML-N supremo and former prime minister of Pakistan Nawaz Sharif offered the funeral prayers of his mother, Begum Shamim Akhtar, in London on Friday along with several family and party members.

The prayers were held in London Central Mosque — alternatively known as Regent's Park Mosque — where the number of participants had to be limited to 30 under the United Kingdom's coronavirus guidelines.

After the prayers, Begum Shamim's body was taken to the London Heathrow Airport for repatriation to Pakistan.

Earlier, ex-finance minister Ishaq Dar had announced that Nawaz Sharif would not be able to accompany his mother's body to Pakistan as he was not declared medically fit to travel by his doctors.

Begum Shamim Akhtar passed away in London on November 22 at the age of 89. She had developed a severe chest infection and was suffering from an advanced stage of Alzheimer's Disease. Her condition had deteriorated and she could not regain her health due to old age.

The deceased was receiving treatment at a London hospital and her body is currently kept at the Avenfield Apartments where she was staying with Nawaz Sharif.

The body had been transferred to the London Central Mosque's mortuary late Sunday night after the coroner and local police spent about three hours at the Sharif family's apartment to complete paperwork to determine the cause of death and other legal requirements.

Funeral prayers of Begum Shamim Akhtar will also be offered at the Sharif Medical City in Jati Umrah on Saturday after which her body will be laid to rest.

The Punjab government on Tuesday approved releasing Shahbaz Sharif and his son Hamza Shahbaz on five-day parole to attend Begum Shamim’s funeral subjected to her body’s arrival in the country.

The two leaders have been imprisoned after being charged for money laundering.