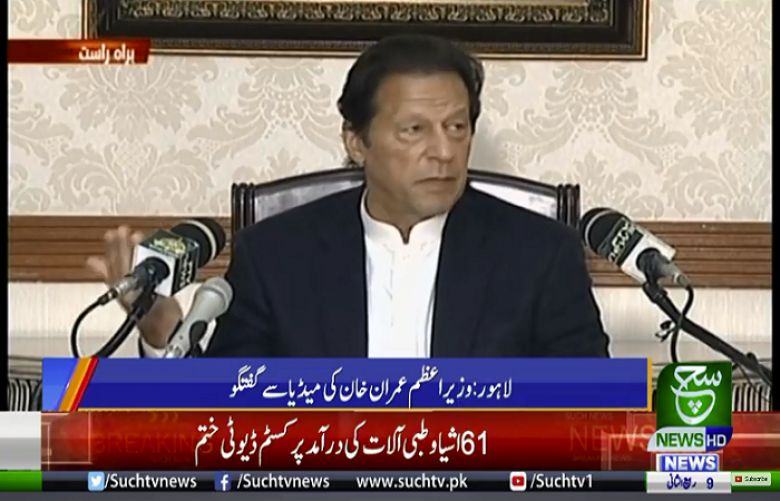 Prime Minister Imran Khan on Wednesday people to act responsibly and wear masks amid the second coronavirus wave, as it is the "easiest precaution one can take".

Addressing a media briefing in Lahore, he expressed concern that the daily death toll has now hit 50 from single digit figures just two weeks ago.

He said that Pakistan will avoid closing down factories and businesses, as people's livelihoods are linked to these. "We cannot render the daily wage worker unemployed."

"But I strongly urge all factory, shop and shopping mall owners to strictly enforce safety protocols. And the easiest thing to do is just to wear a mask."

PM Imran said Pakistan's exports are on the rise and "we are ahead of India and Bangladesh".

"I recently visited Faisalabad and our textile industry is booming, so much so that they are short of workers. So we will not shut down factories," he reiterated.

"While safeguarding against corona, we cannot allow our people to die of hunger. Our economy has recovered after such hard work, we cannot stop its smooth functioning at this juncture," the prime minister said.

The premier said that Pakistan "successfully fought off" the virus in the first wave and urged people to demonstrate the same willingness to follow safety measures "as they had in the early months of the outbreak".

'No rallies will be allowed'

Responding to a query about whether the government will allow the Opposition to continue to hold public rallies, he said that no such activity must take place which causes coronavirus to spread rapidly.

"We must never allow any such activities which cause people to gather. We know that when people have close contact, the virus spreads at a very fast rate.

"Which is why I had appealed to people before as well [...] we had put off our own rally. And I had said that until the situation is brought under control, until the curve of infections is brought down, no rallies will take place," said the prime minister.

PM Imran Khan reminded everyone that an Islamabad High Court order is also in effect which prohibits large gatherings from being held.

"These people are endangering the lives of people," he said.

"These rallies are of absolutely no use at all. They will not get an NRO," vowed the premier, adding that this is why the government will "never allow any rallies".

PM Imran Khan said that there are two projects which are "very important for Pakistan", namely the Ravi River project in Lahore and the Bundal Island project in Karachi.

He said Karachi's population is spreading fast and if a place is not available to distribute the burden of the burgeoning population, the city will be in great trouble.

The premier said that as it is, the city struggles with waste management, sewerage and a clean supply of water.

He said the Bundal Island project will save the mangroves and water treatment plants will be installed to clean polluted water so fishermen don't have to go deep into the waters in search of fish.

Speaking on Lahore, he said: "In Lahore, the water supply is dwindling. In the last 20 years, Lahore has grown 1.5 times. And 70% of the city's green cover has been depleted in this time which has led to increased pollution."

And the city is continuing to spread, he said, adding that where the Ravi River project is being constructed, the city would have expanded to that point anyway, in five to six years.

He said the trouble arises when there is unplanned development. "No one sees where the sewerage is going [..] in the winter months the river is nothing but stream of sewerage."

So the two projects will "save these two cities", he said.

PM Imran Khan said that the projects will focus on vertical expansion, as is done elsewhere in the world, so green areas can be protected — versus being demolished for expansion — and the threat to food security is addressed effectively.

PM Imran Khan the greatest contribution the two projects will have is growth in foreign exchange and creation of jobs.

Speaking of Pakistan's foreign policy, the prime minister said that it is the government's "biggest success".

"Pakistan never had the kind of acceptability it has today. Until now, India was a 'very nice country' and Pakistan 'only belonged to terrorists'," he said, referring to the Western perception that stood in stark contrast between the two countries in recent years.

"It is only because of our government's international lobbying efforts and exposing India for what it is doing in Kashmir [...] ask anyone, any diplomats, they will tell you whether we had this standing 50 years ago."

The prime minister also said that Afghanistan used to consider Pakistan its opponent and was closer to India and the United States would believe we are playing some sort of a "double game".

"Today, Pakistan is seen as the country that is bringing peace to Afghanistan," he said, adding: "No one is asking us to 'do more' any longer, whereas in the past we were being blamed for other people's wars and their failures."

PM Imran Khan today Pakistan has friendly relations with Turkey, Iran, Saudi Arabia, and UAE. "We are under no pressure to recognise Israel."

"The Quaid-e-Azam said in 1948 that Pakistan will never recognise Israel until Palestine are given their due rights and that is what Pakistan continues to firmly believe," he said.