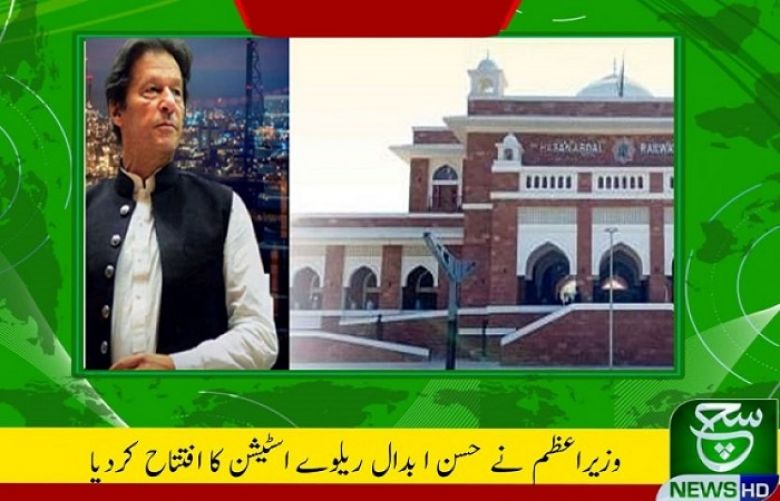 Prime Minister Imran Khan said Friday the role of railways was "crucial" in the journey to Naya Pakistan.

Speaking at the inauguration of the Hassan Abdal Railway Station — renovated and reconstructed after 127 years — in Attock, PM Imran Khan underlined that across the world, trains were a cheap and comfortable way to travel.

"Railways are important because it's a commute for the poor and common people" of Pakistan, he said. "Unfortunately, we did not develop the railway system provided by the British.

"For the first time, the largest investment to Pakistan Railways is coming through the ML-1" or the Main Line 1, he added, referring to the Karachi-Peshawar Railway Line.

PM Imran Khan said the journey Karachi to Lahore through ML-1 would come down to seven hours. The project, he noted, "will be an important step towards self-reliance".

Railways would play an important role in Pakistan's economic development, he remarked, adding that the country should provide all kinds of facilities to improve tourism.

"If we improve tourism, there will be no need to ask for a loan from anyone. I want Pakistan to become a country that does not have to beg anyone," he said.

'People of all religions are equal'

The premier said the government tried to make things easier for the Sikh community, who, he added, would "get a lot of convenience from the Hassan Abdal Railway Station".

"In Naya Pakistan, people of all religions are equal," he said.

Speaking at the event, Railways Minister Sheikh Rashid Ahmed said local resources were utilised for the upgradation of the Hassan Abdal Railway Station.

"The ML-1 project is very important for the development of railways," Rashid added, noting that a reduction in the electricity tariffs for industries was "an important achievement of the government".

Earlier, the premier, accompanied by the railways minister, was briefed about the various facilities installed for the passengers' convenience.

Rashid had previously reviewed the arrangements ahead of the premier's visit to inaugurate the Hassan Abdal Railway Station, the reconstruction of which cost Rs300 million.

The British-era railway station has been upgraded to a two-storey structure, with 24,502 square feet of covered area. The boundary of the railway station covering a total area of 101,610 square feet, including passengers’ facilities, was also improved.

In a briefing, Divisional Superintendent (DS) Railways Syed Munawar Shah apprised the railways minister of facilities at the new structure.

Water plants and a new tube well have been constructed to provide clean and cold water to the passengers, while a 300 KV generator was installed for uninterrupted power supply at the Hassan Abdal Railway Station, Shah told Rashid.

A canteen and a cafe were set up near the waiting area, he added.