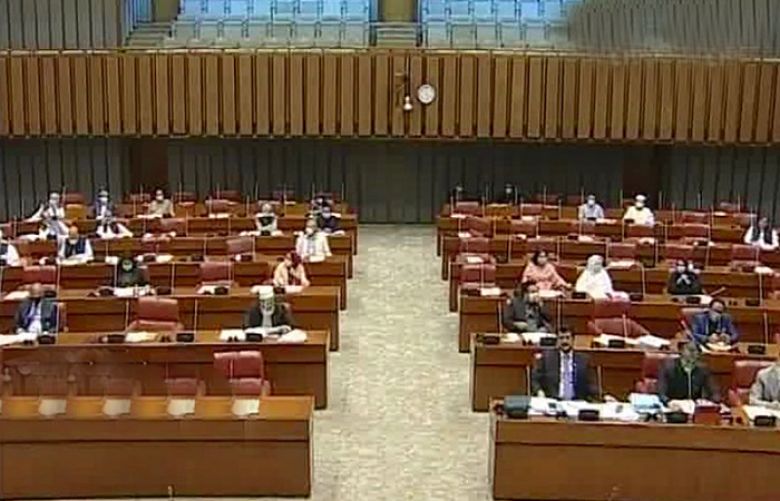 The National Assembly on Monday unanimously passed a resolution condemning the republication of the caricatures of the Holy Prophet Hazrat Muhammad [Peace Be Upon Him] in France.

The resolution was tabled by Federal Minister for Foreign Affairs Shah Mehmood Qureshi.

The resolution maintained that such malicious attacks on the sanctity of the Holy Prophet (PBUH) and all other messengers of Allah are a means to hate speech.

The House proposed 15 March to be officially declared as the ‘International Day against Islamophobia’.

The upper house of the parliament also unanimously passed a resolution condemning latest attempt of republication of the caricatures of the Holy Prophet Hazrat Muhammad [Peace Be Upon Him] in France.

The resolution, moved by leader of the House Dr Shahzad Waseem, said that such condemnable acts supported by the French government further accentuate discord, alienation and divide between the followers of different faiths.

It reaffirmed that the love for our beloved Prophet Muhammad [PBUH] is beyond any doubt and it is part of our faith and no Muslim can tolerate such horrendous acts.

The House strongly urged the parliaments and the international community to come up with a framework and needs to stop the recurrence of such acts in future to ensure peaceful co-existence as well as social and interfaith harmony.

Speaking in the Senate, Minister for Religious Affairs and Inter-faith Harmony Noor-Ul-Haq Qadri said the resolution reflects the sentiments of all Muslims. He said the French President demonstrated irresponsible and criminal behavior.

Earlier, the French ambassador was called to the Ministry of Foreign Affairs today to convey the deep concerns over the recent systematic resurgence of blasphemous acts of republication of caricatures of the Holy Prophet Muhammad (P.B.U.H).

It was underscored that such illegal and Islamophobic acts hurt the sentiments of Muslims across the world, including those in Pakistan. Furthermore, such actions could not be justified in the name of freedom of expression.

“Pakistan strongly condemned equating Islam with terrorism, for narrow electoral and political gains. Such provocative statements and actions were fanning inter-religious hatred, hostility and confrontation thereby imperiling efforts of peace and harmony among various segments of society,” the FO said in a statement.

In his letter, the prime minister had demanded Zukerberg to impose a similar ban on Islamophobia and hate against Islam that has been put in place for the Holocaust.

“I am writing to draw your attention to the growing Islamophobia that is encouraging hate, extremism and violence across the world and especially through the use of social media platforms including Facebook. I appreciate your taking the step to rightly ban any posting that criticizes or questions the Holocaust, which was the culmination of the Nazi pogrom of the Jews in Germany and across Europe as Nazis spread across Europe.”