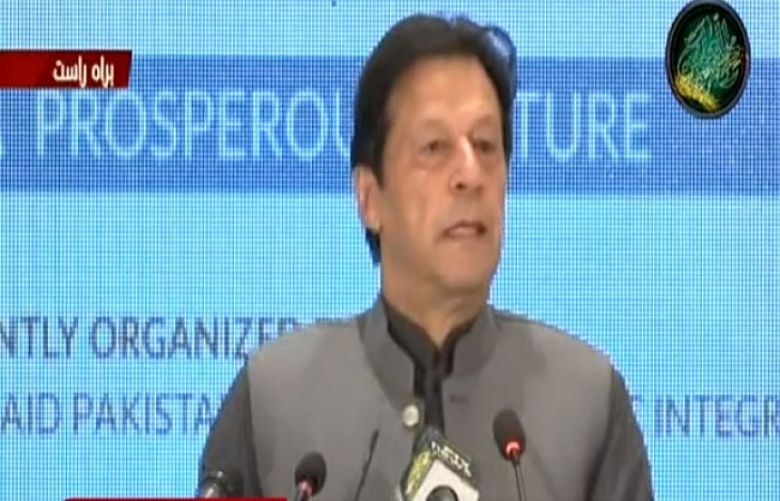 Prime Minister Imran Khan on Monday reiterated the country’s commitment to continue playing its role in bringing peace and stability in war-ravaged Afghanistan.

Speaking at Pakistan-Afghanistan Trade and Investment Forum in Islamabad, he underscored that peace in the neighbouring country is vital to boosting trade and economic activities in the region to bring prosperity and provide job opportunities to people.

The prime minister Imran Khan said Pakistan has suffered the most due to decades-old unrest in Afghanistan that created differences, suspicion and mistrust between Islamabad and Kabul. “We need to ponder what lessons we have learnt from the past,” he stressed.

Prime Minister Khan voiced Pakistan’s concerns regarding India’s hostile posture towards it and the Muslims, saying the country could use Afghan soil to cause instability in Pakistan.

“Our government has decided to strengthen ties with Kabul, no matter who is in power, to counter India’s evil designs,” he said.

“Our future lies in better ties and trade between Pakistan and Afghanistan,” he said, adding efforts are underway to foster ties with Afghan businessmen to benefit from each other’s experiences and give impetus to trade and economic activities.

“We have to take our country towards industrialisation and formulate such policies that lead to wealth creation in the country,” he emphasised.

PM Imran Khan said no foreign intervention in Afghanistan has ever been successful. Afghans should be left to their own devices to elect a government of their choose, he added.