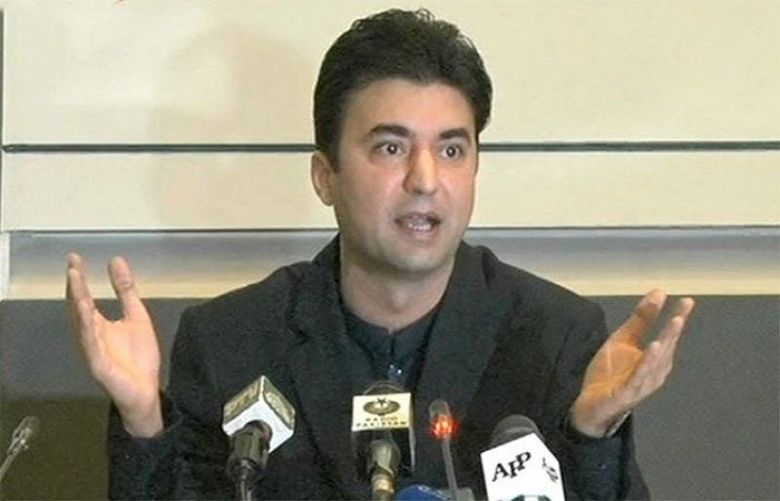 Communications and Postal Services Minister Murad Saeed on Sunday said there were "celebrations in India" over the allegations made against Prime Minister Imran Khan "during the PDM circus", referring to the Opposition parties' Pakistan Democratic Movement.

"The campaign against Imran Khan is being celebrated in India and an international conspiracy hatched against Pakistan and Imran Khan," Saeed added, during a press conference in the federal capital.

"Who benefited from the speeches during the last PDM rally?"

"Imran Khan has become an obstacle in the great game," he said, adding that the Ministry of Interior had written a letter to the UK regarding Nawaz Sharif's deportation from London.

"The prime minister has said that if need be, he would go to bring back Nawaz Sharif himself!"

Lavishing praise on the premier, the federal minister said: "Imran Khan has raised his voice on the Kashmir issue. Imran Khan has laid bare the ideology of RSS before the world. Imran Khan has fought the case of the finality of Prophet Muhammad (PBUH)'s prophethood in international forums.

"Imran Khan can look in the eyes of global leaders while speaking to them. Imran Khan has never engaged in corruption. Imran Khan chose to risk the ire of great powers by speaking up about Palestine.

"Pakistan has started to become known as a tourist destination in the world. Pakistan's sacrifices were presented to the world," he added.

Speaking of Pakistan's east-side neighbour, Saeed sought to shed light on the "great game" of India in which Imran Khan is an obstacle.

"Indian planes were shot down and India faced embarrassment all over the world. India that wants to break Pakistan," he said.

"What is the reason that India has suddenly become worried?" he asked.

"India is celebrating the allegations against Imran Khan in the PDM circus. Whenever India looked down on Pakistan, it faced embarrassment!"

He said famed journalist Barkha Dutt wrote about how Nawaz Sharif secretly met Indian Prime Minister Narendra Modi in Kathmandu. "Who are you benefiting from by promoting Modi's thinking?" he asked, taking another jibe at the former premier.

Saeed said that Nawaz had called India's steel tycoon, Sajjan Jindal, over to Murree without a visa.

"India is no longer Gandhi's India, it is the India of a new era of Hitler. The culprits of Samjhauta Express were released but did anyone say anything about it?"

"There is silence in India on Babri Masjid too. [Congress leader] Rahul Gandhi gets stopped at the airport, he is not allowed to go to Kashmir but did you talk about it on this platform?" he went on to ask Nawaz.

Taking another hit at the Opposition, he said: "When mass graves were found in Kashmir, they remained silent. Did the PDM talk about Indian atrocities?"

"It is due to freedom of expression that fugitives and those accused of corruption are addressing the nation," he added.

"India wants chaos in Pakistan to divert attention from Kashmir. We have to defeat those who want to divide Pakistan."

"An international conspiracy is being hatched" against the country and PM Imran, he added, noting that the nation's armed forces and people have bravely fought terrorism.