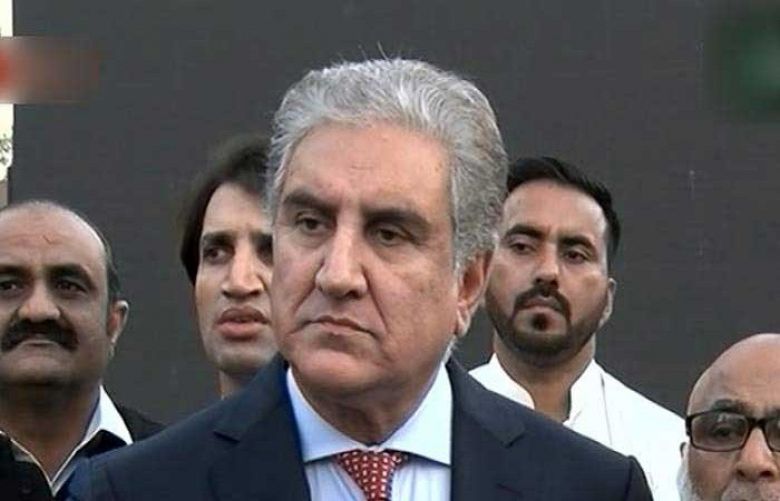 Foreign minister Shah Mahmood Qureshi on Friday warned against falling into the "trap" laid by India with which it seeks to drag Pakistan back to the International Court of Justice.

Speaking to the media in Islamabad, Qureshi said that there are many issues of national importance on which politics should not be played, counting among them Pakistan’s placement on the Financial Action Task Force grey list, the Kashmir issue and the matter of consular access to Indian spy Kulbhushan Jadhav.

“I am surprised at how politics is dragged into everything. I myself am a political appointee, I'm no bureaucrat or diplomat as such, and understand politics,” he said.

The foreign minister was referring to the constant barrage of criticism by Opposition parties questioning Pakistan’s decisions in the international arena, especially over the twin issues of Kashmir and Jadhav which pertain to relations with India.

Most recently, the National Assembly’s Standing Committee on Law and Justice approved a bill that seeks a review of Jadhav's conviction, a move that was met with stiff resistance by the Opposition, who termed it an "NRO" (concession) to the Indian spy.

Assuring the Opposition the government has the country’s best interests at heart, Qureshi said: “Today what Pakistan is doing is because it understands India's motivations.”

He said that India went to ICJ and failed there in securing Jadhav’s release and his return to his country.

“We were asked to provide consular access [to Jadhav]. We have honoured that commitment and have made many offers to India for the same.

“Whenever we make the offer, they find some excuse or the other,” the foreign minister said.

“They don’t wish to avail it because they wish to drag us back to ICJ,” Qureshi explained.

He said the “ignorant politicians” do not understand the nuances behind India’s actions. “They are falling into the trap laid by India. We need to understand their trap.”

“We want to close each door and window that would drag us back to ICJ,” Qureshi resolutely said.

'India will fail to have Pakistan placed in FATF blacklist'

Speaking of the pending decision by FATF regarding Pakistan's fate on its grey list, Qureshi said that while it may be inappropriate to comment in it so close to the decision — it is due to be announced this evening — "one thing I can say is that India will fail in its aim to have Pakistan pushed into the black list".

He said the world is convinced that Pakistan, the current government and the parliament have taken concrete steps to address FATF's concerns.

"The legislation, the administrative measures to check money laundering and terror financing [...] these steps were not taken in recent times."

"The world acknowledges this. Of the 27 actionable items [FATF] had put before us, I can say with certainty we have implemented 21 of them one hundred percent and we are far ahead in progress when it comes to implementing the rest," the foreign minister said.

"FATF must view these steps positively and create some wiggle room for Pakistan," he added.

He said that while Pakistan and the UK don't have an extradition agreement in place, what Britain must understand is why Nawaz went abroad in the first place.

"Could a convicted person have travelled? And why was special permission given?" he said, of the aspects that must be considered.

Answering his own questions, the foreign minister reminded the media that the PML-N supremo was allowed to travel abroad "on humanitarian grounds".

"Because at that time, this image was created that he was battling for his life and media reported it too."

"So forming that as the basis [for the decision] and their assurances — especially by Shahbaz Sharif, besides their stance before the judiciary, [Nawaz was allowed to leave]," he said.

Qureshi said that the government had sought a surety bond and it was worth quite a bit "but the court did not find it appropriate and we respect that".

"Now what has to be considered is that the basis on which he left no longer applies. There is no legal reason no moral grounds to stay [in London] either."

"He must return and answer for the charges against him," Qureshi stressed. "If he has concrete proof, and if he can satisfy the institutions, he must come and not waste this opportunity."

The foreign minister said that the government of Pakistan saw that he is well and participating in political activities and giving speeches.

"So on that basis, we have requested the UK government to see what laws can be used and take action."