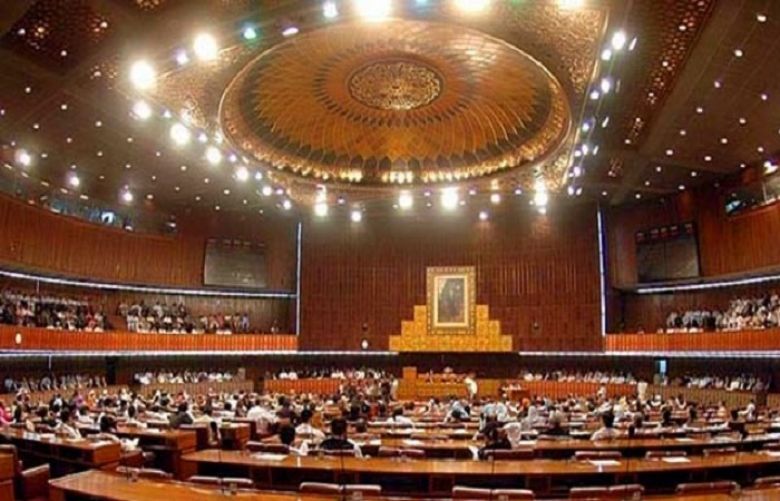 The opposition parties tabled on Thursday a resolution in the Senate regarding the arrest of PML-N leader retired Captain Mohammad Safdar and the alleged abduction of the Sindh inspector general of police.

The resolution, which demanded that a Senate committee be formed to probe the incident, was tabled by Leader of the Opposition in the Senate, PML-N's Raja Zafarul Haq.

Leader of the House Shehzad Waseem, along with other PTI senators, opposed the resolution, saying that two committees had already been constituted to investigate the matter and the upper house should wait for their findings.

A ministerial committee was formed by the Sindh government to investigate the mysterious "circumstances" that led to the early morning raid on the hotel room of PML-N vice president Maryam Nawaz and arrest of her husband retired Capt Mohammad Safdar in Karachi.

During today's proceedings, PML-N leader Haq said that facts of the incident should be presented before the other two committees but that "does not mean that the Senate should remain quiet until the investigation findings come out".

"There will be implications [of waiting for findings]. The implications will be political and legal [...] In order to reach the right outcome, it is important it should be sent to the house committee and anyone who has anything to say about [the incident] can talk in front of it," he said.

PPP leaders Sherry Rehman and Raza Rabbani also supported the resolution, warning that the matter could have serious implications if the parliament does not take action.

Senator Rehman welcomed the army chief's order for an investigation but said that the "Senate should also be allowed to play its role".

"This can lead to a grave crisis and it can turn into a constitutional crisis," she cautioned. "Let Senate play its role."

Rabbani, in his address, said that the incident had created a "precarious situation" and insisted that the Senate plays its role.

"The police force is an armed and uniformed force, and this force registered their protest by applying for leave. It was not just the IG, AIGs, DIGs, even the SHOs [...] They knew that they were protesting against the state. Nothing can be more serious than this that a uniformed force protests against the state or a step taken by the state. This needs to be handled properly," he said and added: "If the Parliament doesn't come in action, situation can worsen."

He also lauded the army chief's promise to hold a probe but pointed out that it would be a "departmental inquiry".

The former Senate chairperson said that the resolution could be taken up under Rule 263 and urged the incumbent chair Sadiq Sanjrani to head the committee "so that there is no witch hunt".

Law Minister Farogh Naseem, in a brief comment, said that it was the "privilege of the Senate" to form a committee, adding that the "truth has to come to surface". He further said that a conversation on the statute regarding the sanctity of Quaid-i-Azam Mohammad Ali Jinnah's mausoleum should also be held.

PTI Senator Waseem also regretted that no one was talking about the "violation" that had taken place at Jinnah's mausoleum. While talking about the first information report — which the opposition alleges was filed against Safdar at the behest of PTI — the leader of the upper house said that any citizen had the right to lodge a complaint with the police.

According to the Sindh chief minister, the complainant in the case, identified as Waqas, allegedly had a meeting with a PTI minister. It was also revealed that Waqas had a criminal record and was an absconder.

Information Minister Shibli Faraz also addressed the Senate and rebuked the opposition for "putting pressure" on the government by making speeches instead of talking about the "crime" committed by Safdar at Jinnah's mausoleum.

"[This is like] a murder has been committed and no one is talking about the victim. You (opposition) don't want to talk about what happened, you are trying to do politics over this [incident]. As Pakistanis you should have condemned it and taken action," he said.

The information minister pointed out that two investigation committees had already been formed. He went on to allege that the opposition "does not care about the consequences" of its stance.

"Look at what our neighbouring country is saying because of the material you provided them," Faraz said.

"This house has to decide whether Pakistan is important or some personalities. This resolution should not be entertained. A debate on this should be held and we will move a resolution to discuss if such conduct should be allowed," the federal minister said.

The matter was referred to the existing law committee.

Meanwhile, Jamiat Ulema-i-Islam (Fazl) Senator Maulana Abdul Ghafoor Haideri rejected the probe ordered by the army chief, saying, "how can the institution, which is guilty, conduct an investigation?"

"These investigations are equivalent to fooling people," he declared and added: "What kind of justice can be expected if the guilty party becomes the judge?"

Meanwhile, the Sindh government on Thursday notified the committee tasked with conducting an inquiry into the events leading to Captain (r) Safdar's arrest in Karachi.

The committee, according to the notification, will "enquire and probe into the incident of 18th and 19th October 2020 wherein Police was allegedly pressurized to lodge FIR against Capt. (r) Safdar".

Besides, it will also investigate the manner in which police personnel raided the Avari Towers hotel, "allegedly violating the privacy and dignity of Maryam Nawaz, Vice-President of PML-N and Capt (r) Safdar.

The notification adds that the committee, which must submit its report within 30 days, will further investigate the "alleged ridiculing, mishandling of the highest level of the police which left the entire police force demoralised and unwilling to continue with their duties".

In a shock move following Safdar's arrest on Monday morning, Sindh IGP Mushtaq Mahar, at least two additional inspectors general, seven deputy inspectors general and six senior superintendents of Sindh police on Tuesday applied for leave in order to "come out of […] shock" caused by the "episode of registration of FIR against Capt (R) Safdar".

According to the applications — all of which were identical — submitted to IGP Mahar, the officials said that it had become hard for them to "discharge [their] duties in a professional manner" due to the stress caused by Safdar's arrest.

The development came after a purported voice message by PML-N leader and former Sindh governor Muhammad Zubair was shared by a journalist in which Zubair alleged that the inspector general of police was kidnapped and forced to register the first-information report against Maryam, her husband Safdar and 200 others for violating the sanctity of the Quaid's mausoleum.

In the audio clip circulating on Twitter, Zubair purportedly said that Chief Minister Murad Shah confirmed to him that police was pressured into making the arrest. "When they (police) refused to do that, Rangers kidnapped [the IGP]," Zubair said.

The leave applications were later withdrawn after Bilawal called on Army Chief Gen Bajwa and ISI DG Lt Gen Hameed to investigate the circumstances surrounding the arrest of Safdar and "investigate your institution [and] how it is operating in this province".

Moments later, Gen Bajwa took notice of the incident and also spoke to Bilawal over the phone. Bilawal, accompanied by Sindh Chief Minister Murad Ali Shah, visited the IG to smooth over matters.

On October 18 — the day of the rally hosted by PPP in Karachi — Safdar had visited the Quaid's mausoleum along with party workers and Maryam, where he jumped inside the perimeter of the founder's resting place and raised slogans, a move that had drawn widespread criticism.

The next day, he was arrested by police from his hotel room on charges of violating the sanctity of Jinnah’s mausoleum and hurling murder threats at some individuals. Safdar was later released on bail.

The arrest drew widespread criticism from the opposition and some leaders of the PDM, including Maryam, had claimed in a presser after Safdar's arrest that the move was an attempt to enforce cracks among the opposition by the federal government and its agencies. The PPP administration, which was left in an awkward position, distanced itself from the move.