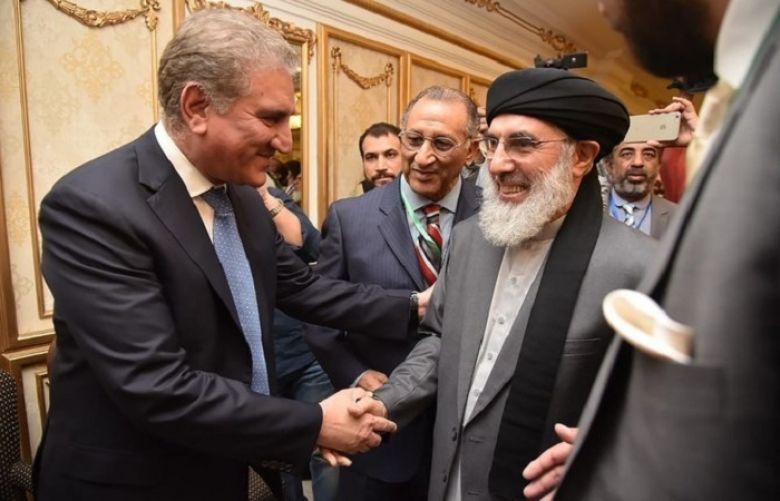 Hezb-e-Islami leader will also meet the prime minister and president.

Gulbuddin Hekmatyar, leader of Hezb-e-Islami of Afghanistan, along with a delegation arrived in the federal capital on Monday on a three-day visit as part of ongoing efforts seeking an end to the lingering unrest in Afghanistan.

This is the second high-level visit from Afghanistan after the recent arrival of Dr Abdullah Abdullah, the head of Afghan Peace Council.

Soon after his arrival, the Hezb-e-Islami leader met Foreign Minister Shah Mehmood Qureshi. Matter of bilateral interest and the Afghan peace process was discussed between the two.

According to the Foreign Office (FO) Hekmatyar would also meet the prime minister and president and will meet chairman senate, speaker National Assembly, foreign minister and other dignitaries. He will also deliver a talk at a policy think-tank and interact with the media.

The visit of Hekmatyar will provide an opportunity for the exchange of views on the Afghan peace process and strengthening of Pakistan-Afghanistan bilateral relations as well as people-to-people interaction, the FO statement added earlier.

Hekmatyar was a Mujahideen leader, who fought against the former Soviet Union invasion of Afghanistan. He also served as Afghan prime minister in the 1990s.

After the ouster of Taliban regime in 2001 by the United States, the Afghan leader fought against the US-led forces, but in 2016, signed a peace deal with President Asharaf Ghani, ending his 20 years of exile and resistance.

The intra-Afghan dialogue is currently underway in Doha and the two sides are trying to evolve consensus on the agenda and rules of engagement.

Although US President Donald Trump wants to see some progress before November 3 elections, the observers are skeptical of any major breakthrough during intra-Afghan dialogue in the near future.

Pakistan played a key role in brokering the deal between the US and Taliban and intra-Afghan dialogue.

The US and Afghan side expect Pakistan to persuade the Taliban to agree on a ceasefire or reduce the current level of violence.

Taliban have so far refused to agree on a truce, insisting ceasefire would be part of the overall agreement reached through talks.