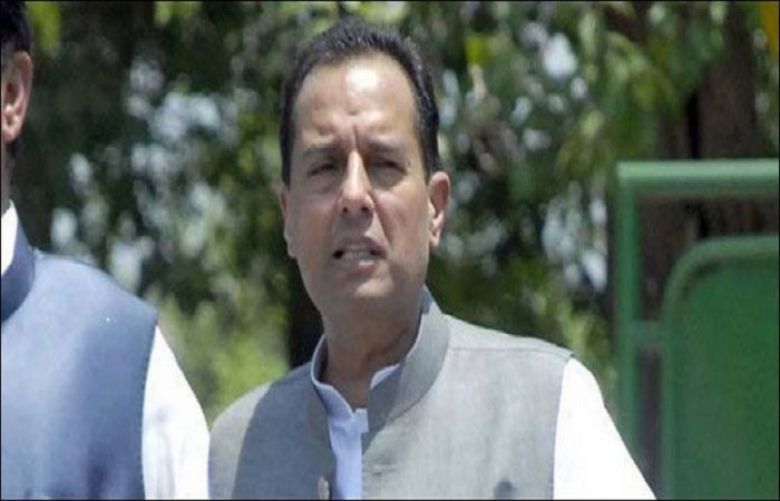 The Judicial Magistrate East has approved Captain (retd) Safdar's bail in "violating the sanctity of Mazar-e-Quaid" case, and instructed him to submit surety bonds worth Rs100,000.

The development comes shortly after PML-N vice president Maryam Nawaz, addressing a press conference, had said that her husband, Safdar, had been released on bail.

Safdar had been arrested Monday morning from the hotel after he was booked for violating the sanctity of the Mazar-e-Quaid. He was presented before a judicial magistrate in the afternoon where he was granted bail.

"Me and Captain Safdar will go from Karachi together," she said after a lengthy press conference in which she bashed the federal government.

Safdar was earlier kept at the Aziz Bhatti Police Station before he was presented before the magistrate. Maryam had taken to Twitter after Safdar was arrested and tweeted that police had "broken" the door of hotel room they were staying in to arrest her husband.

"Police broke my room door at the hotel I was staying at in Karachi and arrested Capt. Safdar," she tweeted.

She also retweeted a video claiming that police had 'forcefully' entered her hotel room to arrest her husband.

Police broke my room door at the hotel I was staying at in Karachi and arrested Capt. Safdar.

The PML-N leader was taken into custody after he was booked in a case pertaining to the violation of the sanctity of the Quaid-e-Azam's Mazar where a day earlier he had chanted the slogan "vote ko izzat do (honour the vote)" and urged people to join him.

Party workers and supporters had responded to Safdar's call and chanted along for an extended period of time as Maryam Nawaz and party spokesperson Marriyum Aurangzeb looked on.

The video retweeted by Maryam Nawaz on Twitter which shows the broken door of Karachi hotel from where Captain Safdar was arrested on Monday morning.

The move was met by a fierce reaction by government representatives who not only demanded an apology, but approached the police, asking them to initiate legal action against all those who participated in the act.

The Quaid-e-Azam's Mazar is protected by a set of special laws that prohibit all kinds of political activities within its premises.

Police had filed a case on the complaint of a citizen at the Brigade Police Station on Monday and named Captain Safdar, Maryam Nawaz and 200 other unidentified people in the first information report.

According to sources, Captain Safdar has been shifted to the Aziz Bhatti Police Station.

While condemning the manner in which Sindh Police acted against the PML-N leader, senior PPP leader and provincial minister Saeed Ghani stated that the arrest had not been made on the direction of Sindh government.

“What Capt Safdar did at the Mazar was not appropriate,” Ghani conceded, but added that the arrest, “was an attempt to create differences among the PDM parties, which will be foiled”.

While reacting to the development, Prime Minister's Adviser on Interior Mirza Shahzad Akbar called the arrest a “publicity stunt” by opposition parties.

Taking to Twitter, Akbar reminded Maryam Nawaz that “Sindh police is under [the] complete and direct control” of PPP Chairman Bilawal Bhutto, who is the PML-N’s ally these days.

“Either the arrest of your husband was staged by you n your new ally as publicity stunt or you’re working against each other STILL! Which one is it?”

The federal minister said that the law must take its course.

The Quaid’s mausoleum, which is declared “an historical monument of national importance” is maintained and protected under a special law.

The ordinance, “The Quaid-i-Azam’s Mazar (Protection and Maintenance) Ordinance, 1971”, prohibits all kinds of demonstrations and political activities within the premises.

It states: “No person shall organise, convene or take part in any meeting or demonstration or procession or engage in political: activity of any kind within the Quaid-i-Azam's Mazar or within a distance of ten feet from the outer boundary thereof.”