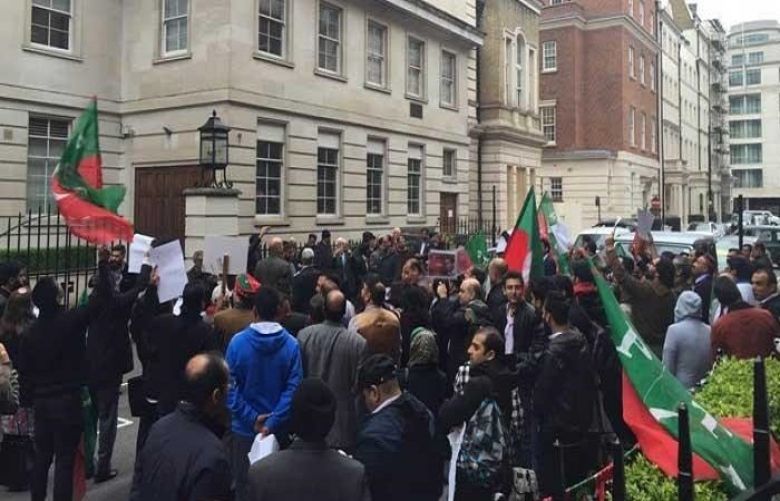 Political workers belonging to the Pakistan Tehreek-e-Insaaf (PTI) and Pakistan Muslim League (N) protested against each other during a rowdy confrontation both outside the office of Hassan Nawaz in Stanhope House and at the Avenfield apartments.

During the protest, Nawaz Sharif was inside Hasan’s office preparing to address the Pakistan Democratic Movement (PDM) public gathering in Gujranwala.

The protest against Nawaz Sharif was led by Prime Minister Imran Khan's spokesperson on Trade and Investment in the UK and Europe, Sahibzada Jahangir, and the counter protest was led by PMLN activists who had assembled outside the venue after learning from media about the PTI’s protest. At its peak, the PTI protest outside Hasan’s office was attended by around 24 people and around 45 PMLN activists countered the protest.

Many of the protestors belonging to the PTI held placards carrying slogans against Nawaz Sharif, asking him to return to Pakistan.

The protest outside Avenfield flats was winded within 45 minutes as only five people attended the protest. PMLN’s social media activist Safina Sheikh and others held the counter protest.

Sahibzada Jahangir with his team arrived at Hasan’s office directly and then both sides engaged in a shouting match which lasted for three hours. Both sides accused each other of corruption, theft, nepotism and incompetence.

Sahibzada Jahangir said: "PTI has joined this protest because various political workers in the UK came here. They include lawyers, nurses and other professionals. Nawaz Sharif is a convicted prime minister and sitting in London. He should go back to Pakistan because he had come to the UK on medical grounds and he must return now. Imran Khan said that he would make Nawaz cry, we are here to fulfill that promise."

A heavy contingent of police remained present outside Stanhope House.

Safina Khan, who is the President of the PML-N UK Social Media team said: "These PTI workers came to protest outside Nawaz Sharif's office but they are crying now. PML-N workers have overwhelmed them.

"These are all paid goons who have been paid money by the Government of Pakistan to come here and cause a havoc outside Nawaz Sharif's office. Now look you can see yourself that PML-N workers have won the show in Gujranwala and also in London."

Nasir Butt and Begum Nawadar Ali Khan said Nawaz Sharif had asked workers not to come to the counter protest but the workers cam on their own free will. They said that hundreds would have

According to the latest Covid-19 guidelines, the protestors were supposed to stay 6 feet apart from each other but the attendees of both protests didn’t care for the rules and stood next to each other. The police on the scene separated the both sides from fighting each other and to follow the guidelines.