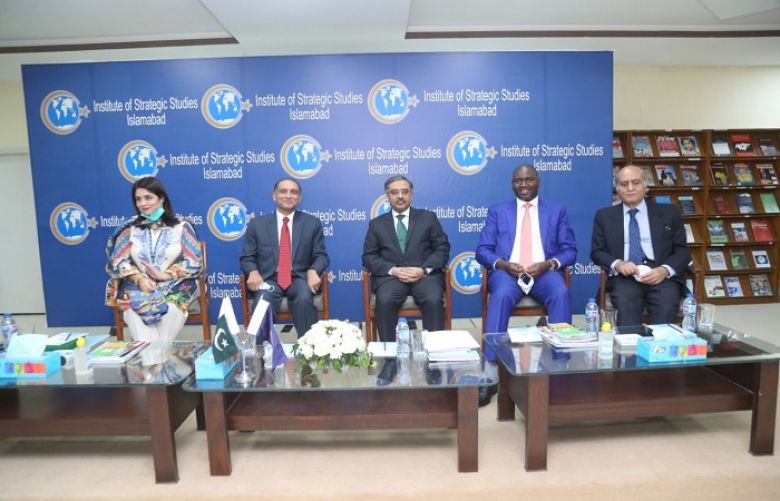 The Institute of Strategic Studies Islamabad (ISSI) held the inauguration of its Centre for Middle East & Africa (CMEA) today.

Mr. Sohail Mahmood, Foreign Secretary of Pakistan was the Chief Guest, while H.E. Prof. Julius Kibet Bitok, High Commissioner of the Republic of Kenya & Dean of African Countries’ Ambassadors in Pakistan also made remarks on the occasion.

The newly established Centre at the ISSI aims to promote and provide quality research, analysis, policy input and dialogue on issues related to the Middle East and Africa. CMEA’s functions include observing latest developments, contributing in-depth research and analysis, organizing and promoting dialogue and debate on political, security, economic, and social aspects of the Middle East and Africa countries, with the focus on relevance for Pakistan.

During his remarks, Mr. Sohail Mahmood stated that the Middle East is one of the most critical areas in the world today. Its strategic significance stems from its flow as the major energy supply in the world. The people of Pakistan, share strong linkages with the people of the Middle East region. There are no issues where Pakistan has not stood shoulder to shoulder with the Muslim countries, he said. The economic dimension of the Middle East is also significant for Pakistan. An example is how the region has one of the largest concentrations of Pakistani workers which play a significant role both for their home and host country.

Both Pakistan and Africa have been successful against their colonizers, which entails a natural meeting of the two sides. Both Pakistan and Africa also have a strong tradition of mutual support. He was of the view that with the Pak-Africa conference in Nairobi, Pakistan and Africa have embarked on a new journey. Moreover, under its Engage Africa policy, the Government of Pakistan is shoring up its diplomatic presence in this important part of the world and focusing on both connectivity and complementarity. He concluded by expressing that the establishment of CMEA is both timely and beneficial and ensured the support of the foreign office in its future endeavours.

H.E. Prof. Julius Kibet Bitok voiced his happiness with the steps the Government of Pakistan has taken to engage with Africa. A classic example was the recently held Pakistan- Africa Trade and Development Conference held in Nairobi in January 2020, which he called a landmark development in the ‘Engage Africa’ policy of Pakistan. The conference hosted over a hundred business men and women from Pakistan. He said that there was no better time to forge better and deeper partnership especially in the backdrop of Pakistan’s ‘Engage Africa’ policy coupled together with the new African Continental Free Trade Agreement. He said he looked forward to future interactions and visits at the highest levels of government. These, he said were engines of effective engagement. He expressed his hope that the Centre will be able to find solutions to issues that affect the ME&A region, and further build on the Africa- Pakistan relationship.

Ms. Amina Khan, Director CMEA, in her introductory remarks underscored the importance of studying different regions and countries in order to better understand their respective challenges and responsibilities. She said that in the case of Pakistan, it is important that research becomes focused on regions that are significant for Pakistan’s foreign policy, and also on those that are ignored despite repeated slogans of their high potential, such as the ME&A region which is of immense importance for Pakistan. She concluded that “We at CMEA envisage to expand our work and engage with similar organizations and individuals from around the globe through research, webinars/conferences on issues related to the Middle Eastern and African regions with the aim to become a Centre of excellence.”

Earlier, in his welcome remarks, the Director General ISSI, Ambassador Aizaz Ahmad Chaudhry stated that the work of all the Centres of Excellence at ISSI is driven from the priority to improve the quality of research and analysis both inside and outside the ISSI. He said that the aim was to create a synergy between research and dialogue in order to be relevant to the Government, people and the national interests of Pakistan.

CMEA has a unique significance for Pakistan as the Middle East is a region where Pakistan has huge stakes, especially in the Gulf, necessitating a detailed study of the geo-politics of the region. While engaging with Africa is also one of the top priorities for the Government of Pakistan. He hoped that CMEA would deliver on this front and work closely with the government in this regard.