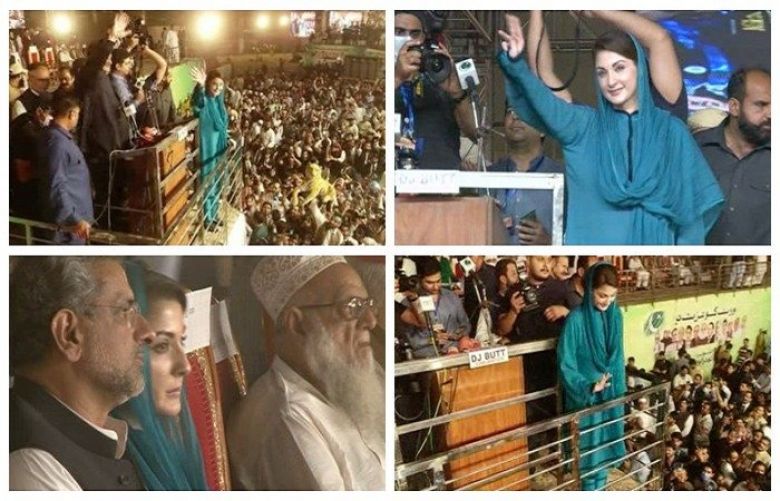 The Opposition parties' Pakistan Democratic Movement is holding its first mass contact campaign today in Gujranwala as a show of force against the incumbent PTI government which they say has "failed the people in all sectors".

The alliance was given permission to hold the rally on Thursday by the government after the Gujranwala District Administration and the PDM reached a 28-point agreement on how the jalsa would be held.

PPP chairperson Bilawal Bhutto Zardari, while addressing the rally, said Pakistan’s economy is facing the worst crisis in its history which he said led to the unprecedented inflation and poverty in the country.

“People are even unable to afford two meals a day and situation is getting worse by day,” he said while blaming Prime Minister Imran for wreaking havoc in the country.

Citing an example of prevailing crisis, Bilawal said, “This is the change brought by Imran and his selectors”.

While recalling that how his government dealt with multiple challenges in 2008, Bilawal lashed out at PM Imran, saying “he has only Tiger Force to resolve all issues.”

He claimed that the PTI-led government under the guise of anti-corruption drive is only victimising their political opponents and added that PM Imran and his sister, Aleema were not put behind when corruption allegations were levelled against them.

“Who made the decision of Punjab chief minister? Was he selected by any magician or khalai makhlooq (alien)”. Bilawal said he knew for sure that CM Usman Buzdar was not the choice of the people of the province.

Referring to PM Imran’s recent visit to shelter home in Islamabad, Maryam says “tell him [PM Imran] that now people will not provide him refuge no matter what”.

She urged PM Imran to resign or “else people will throw you out”.

She said only people of the country should have the authority to elect or topple any government.

The PML-N stalwart said PM Imran boasted that state institutions of the country are on the same page. “He [PM Imran] must keep this in mind that it won’t take too long in turning the page.”

PML-N supremo Nawaz Sharif while addressing the public gathering via video link from London urged his supporters to stand up against those who have made their living conditions miserable and created mess in the country.

He lashed out at the Prime Minister Imran Khan’s government, saying prices of all basic commodities including medicines have sky-rocketed which have made the lives of people miserable and they are unable to even afford basic staples.

Another opposition leader from Balochistan, Mahmood Khan Achakzai said violators of Constitution are the “real traitors of the country”.

The PkMAP chief said that opposition’s prime objective is restoring the supremacy of Constitution in the country and added that he will rebel against those who disobey the law.

Former prime minister and PPP leader Raja Pervez Ashraf said all opposition parties have joined hands to fight the “epidemic of inflation”, which has made it difficult for the masses to make both ends meet.

“This fraudster [PM Imran] has to go now and we will topple his government,” he said, adding PDM will continue its struggle until an elected government take the reins of the country.

Former prime minister and PML-N senior leader Shahid Khaqan Abbasi said the presence of a “mammoth crowd” in the stadium is a success of democracy.

He claimed that those who brought PM Imran into power are also missing the tenure of ousted PML-N premier Nawaz Sharif today.

“This hybrid system has failed and any system which is based on lies and fraud can never succeed.”

Addressing the rally, PML-N stalwart Ahsan Iqbal urged the people of the country to become part of the anti-government movement to end “unprecedented inflation and bad governance”.

He said PML-N during its last tenure in the government served the people of the country by resolving many issues including loadshedding, inflation and water shortage.

PML-N leader Khawaja Asif, while addressing the rally, said all opposition parties of the country have formed the alliance against Prime Minister Imran khan to oust him from the power.

“No one is happy with this government not even his [Imran Khan] own supporters and ‘his selectors’,” he said, adding that PDM will restore the democracy in the country and send the PTI-led government packing.

PML-N leader Rana Sanaullah said Prime Minister Imran has committed a fraud with the country by not fulfilling his pre-elections promises of providing 10 million jobs and reviving economy.

“Today from the platform of PDM we pledge that we will honour the sanctity of votes and only elected people will rule this country,” he said while addressing the rally.

PPP chairperson Bilawal Bhutto Zardari stopped at Wazirabad while en route to Gujranwala from Lalamusa to address his party workers.

Bilawal said opposition parties have taken to the streets against “tyrant rulers” who he accused of making the lives of masses miserable.

He said opposition parties from the platform of PDM will fight against the prevailing system and restore the real democracy in the country.

Hitting at Prime Minister Imran Khan, he chanted slogans: “Go Imran Go, Your time is up.”

PML-N Vice President Maryam Nawaz left her residence in Jati Umra earlier in the day and was likey to reach the venue by 10pm.

In a tweet, the PML-N leader stated that she has embarked this journey as Nawaz’s ‘foot soldier’.

“I have dedicated myself to your struggle, your mission for Pakistan and it’s people. May Allah be with us and may we return triumphant and victorious Insha’Allah. Pakistan Zindabad,” she added.

Speaking to the media outside Jati Umra, Maryam warned law enforcement agencies against creating difficulties for people trying to reach the rally venue.

“This is not just for the people but it’s a fight for everyone’s rights,” she said.

She stated that this movement was a struggle for the rights of the common people and appealed the people of Gujranwala to join the rally.

He said Prime Minister Imran Khan, who at the peak of coronavirus pandemic was against lockdowns, has suddenly developed concerns regarding the spread of contagion.

“Imran Khan boasted of giving containers and food to opposition parties, if they were to hold protests but on the contrary Imran has put containers to stop them from holding the rally,” he said adding that PPP workers were being arrested, harassed and raids were made to several of his office bearers offices and residences.

"Imran Khan can register FIR on opposition parties but cannot register and FIR on hunger, he cannot arrest poverty and unemployment,” Bilawal said, inviting people of Pakistan to become part of PDM and get rid of this “undemocratic government”.

The PPP chairman stated that it is unfortunate that undemocratic tactics were still in use even in 2020.

Speaking regarding the upcoming G-B elections, Bilawal said that rigging in the region’s polls would tantamount to a national security threat.

“If elections are rigged then we will march towards Islamabad along with the people of G-B in protest the very next day,” he warned.

JUI-F chief Maulana Fazlur Rehman, speaking to the media in Lahore before leaving for the venue, lambasted the government and denied that any political party was waiting for an agreement with the government.

He said that the opposition was committed and parties have united to restore the sanctity of the people's vote.

"We don't have personal enmity with anyone. But it should be specified that Pakistan belongs to Pakistanis. It does not belong to Western entities,” he said.

Prime Minister Imran’s aide on political communication Shehbaz Gill said that the government has provided hand sanitizers, face masks and thermal guns for the participants of the opposition rally in a bid to stem the spread of Covid-19.

He shared a video on his Twitter handle in which rally goers can be seen sanitising their hands before entering into the venue.

The Punjab Government has allowed the opposition to hold the rally at Jinnah Stadium under strict conditions.

In a 28-point undertaking submitted to the authorities, PML-N leaders agreed to the conditions which include that participants of the opposition’s grand show would not be allowed to enter the venue without a mask and sit at a distance of three to six feet from each other.

Slogans that are “anti-state/objectionable/offensive” and speeches against constitutional offices, armed forces and judiciary had been prohibited.

The organisers would install walk-through gates and provide sanitisers at the entrance and exit gates of the venue.

The PDM would arrange lighting at the venue and ensure that there is no display of weaponry or fireworks.

There would be no wall-chalking in the city in connection with the rally and party banners would be put up only after the permission from the relevant authority.

In case of violation of any of the terms and conditions, organisers would face legal proceedings and the permission would be cancelled immediately.

However, Despite the PDM being given the nod to stage its grand show, the government was apparently engaged in efforts to curtail the influx of opposition activists workers to Gujranwala.

Since late October 14, vehicles had been parked on roads leading to Gujranwala and on the thoroughfares in Lahore that were likely to be used as roadblocks.

Police were reportedly arresting opposition activists across Punjab. The three main opposition parties, the PML-N, the PPP and the JUI-F, lodged their protest against arrests of their activists.

A list of around 800 PML-N activists from Lahore has been circulating on social media. The list identifies the activists as miscreants, indicating that they might be arrested.

Furthermore, transporters had been strictly instructed not to rent out their vehicles to political parties.