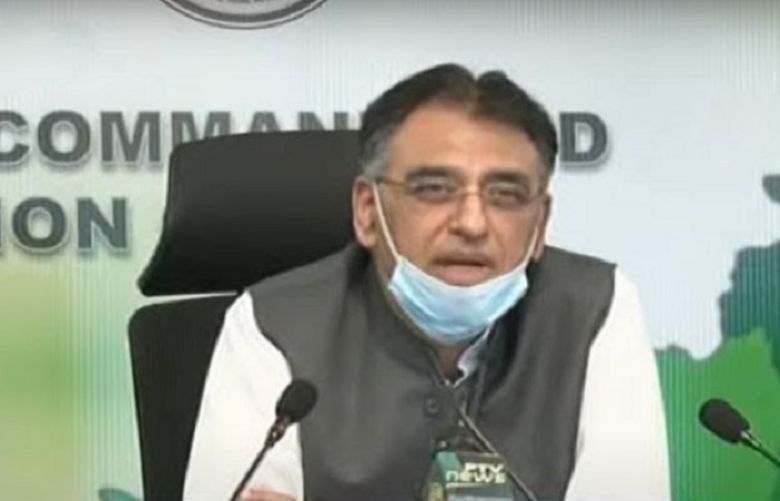 Federal Minister for Planning Asad Umar Thursday said there are “unmistakable signs of the rise of corona” in the country and the government may have to take “restrictive actions” to curb the spread, which will have “negative effects” on the livelihoods of the people.

In a series of tweets on Thursday, Asad Umar said the national positivity of COVID-19 cases was 2.37% yesterday, which is the highest in more than 50 days.

The minister, who also oversees Pakistan’s response to the pandemic, said 11 virus deaths on average have been reported during the first four days of this week, the highest since August 10.

These are the "unmistakable signs of the rise of corona" in Pakistan, he said.

The federal minister said that the COVID-19 positivity is “extremely high” in Muzaffarabad, “high” in Karachi and “rising” in Lahore and Islamabad.

“Time for all of us to take covid sop's seriously again. Otherwise, unfortunately we may have to take restrictive actions which have negative effects on peoples livelihoods.”

Earlier this week, the Pakistan Medical Association had warned that a second coronavirus wave could hit the country this winter.

The PMC warned authorities and the general public about the foreseeable second spike of coronavirus, saying that it is likely to start from educational institutions as it happened in US, India and Iran.

“Unfortunately, the government’s response so far is limited to the issuance of notifications of Standard Operating Procedures (SOPs), whose implementation is non-existent anywhere including schools,” said the PMA office-bearers while addressing a press conference.

They had said that the winter has arrived and schools have opened, and any carelessness on part of the government and the public might trigger a second spike of coronavirus in the country.

“However, the situation on the ground is entirely opposite as no precautions were being observed in schools, which were opened in congested buildings,” they had regretted.