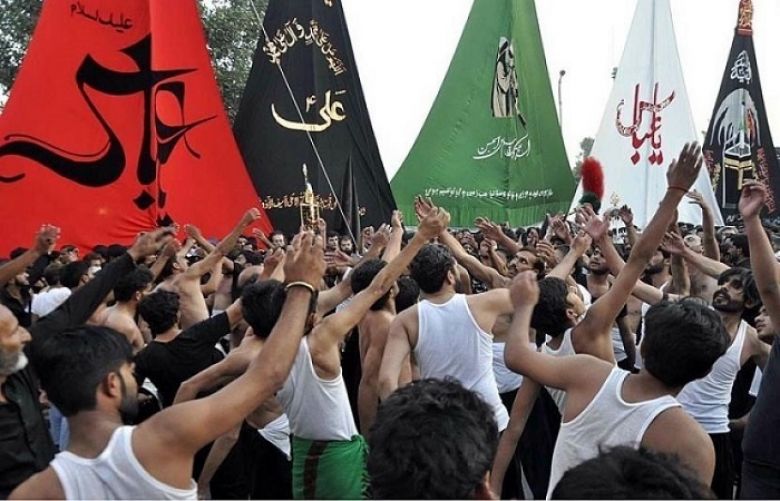 Chehlum’ of Imam Hussain (AS) has observed on Wednesday, in Islamabad with religious enthusiasm and fervour in a peaceful atmosphere but in tight security because of the fear of possible violence.

Muharram stands as a reminder to mankind for the heroic struggle and martyrdom of Imam Hussein (AS), the grandson of the Holy Prophet Muhammad (peace be upon him), against the corruption and destruction of human rights by a tyrant ruler.

The law enforcement agencies of Islamabad Capital Territory, on serious threats of, have beefed up security of the sensitive areas, specially, around Imambargahs, masques and religious places on the occasion of ‘Chehlum’ of Imam Hussain (AS).

Stringent security measures were adopted in and around the Imambargah Markazia, G-6/2 as well as on the set route of the mourning procession.

“Additional security personnel was deployed in and around sensitive areas of the capital”, an official said.

The sources said that the law enforcing agencies were directed to be extra vigilant, especially during the mourning processions and ‘Majalis-e-Aza.’

“Police and law enforcing agencies remained on high alert during the holy day, amid the fear of violent uproar on the occasion of ‘Majalis-e-Aza’ and mourning processions”, an official of a security agency said.

Over 2000 armed personnel of law enforcing agencies and 4 Wings of Rangers and paramilitary took part in keeping peace on ‘Chehlum’ of martyrs of Karbala.

All the roads and streets opening to Markazia Imambargahs were closed and even pedestrians were not allowed to sneak into the Imambargah through adjacent entries. The route of the mourning procession was completely fenced and horse-riding commandos were kept roaming in and outside the fence to keep eye on the suspicious people.

Unique measures were taken by the Islamabad operational police and Islamabad Traffic Police (ITP) effectively that no traffic hurdle was found even during the peak time and the traffic remained running on the parallel routs.

Over 250 traffic personnel were deployed to keep the traffic smooth around Imambargahs and on procession routs, SSP (Traffic) told the media people.

While, no untoward incident was reported during the ‘Majlis’ and mourning procession.

The Islamabad administration took stringent security measures to maintain peace in Imambargahs and fixed routes of the mourning processions and no one was allowed to enter into the procession.

Deputy Inspector General of Police, Waqaruddin Syed, Deputy Commissioner (DC) Hamza Shafqaat and Zonal Heads of the police and station house officer (SHOs) were present on the occasion to observe the law and order situation.

Small processions started to gather in Markazi Imambargah in the morning from adjacent areas including Noorpur Shahan, Shahzad Town, Tarlai, Shah Allah Ditta and different areas of Rawalpindi too.

They highlighted the significance of the day and shed light on the sacrifices rendered by Imam Hussain (A.S) and his followers to uphold the supremacy of Islam.

Later, a main procession was taken out from the Markazi Imambargah and mosque that passed through its traditional routes, Luqman Hakeem Road, Lal Quarters, 7th Avenue, Municipal Road, Melody and finally terminated at the Markzi Imambargah.