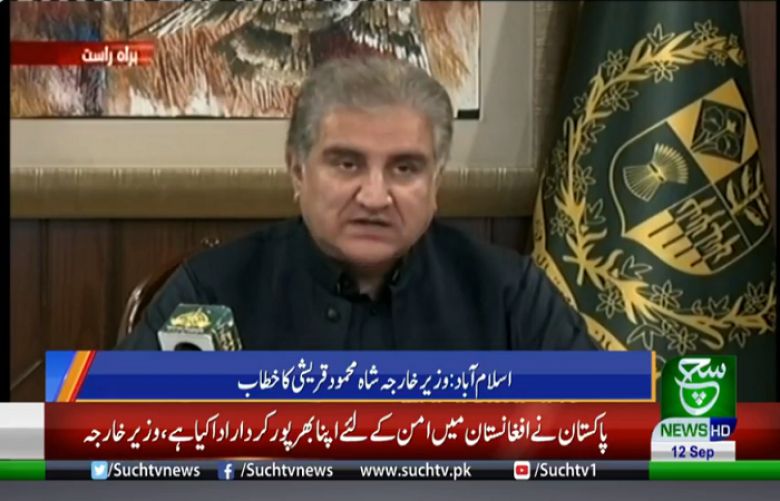 Foreign Minister Shah Mahmood Qureshi assured the world that Pakistan would stand by a democratic Afghanistan which was at peace with itself and its neighbours, as the historic intra-Afghanistan peace talks begin today in Doha.

Addressing an international peace conference via a video link in Islamabad, the foreign minister noted that Pakistani citizens and law enforcement personals have rendered invaluable sacrifices in the war against terrorism.

Speaking about the world's attitude over the past couple of decades towards Afghanistan, he said that it was imperative that the mistakes of the past were not repeated and the Afghan people were not abandoned.

"The progress achieved should not be wasted. A prosperous and peaceful Afghanistan will bring new opportunities for the people and would also open new vistas of cooperation and connectivity in the region and beyond," he said.

Suggesting a four-pronged way forward, the minister called upon the international community and all concerned to come forward and continue to support the Afghan-led and Afghan-owned peace process while respecting the consensus that emerges from the intra-Afghan negotiations.

Secondly, he called upon the global community to ensure that Afghanistan neither witnesses the violence of the days in the past again nor becomes a space for elements to harm other countries beyond its borders.

Thirdly, he said it was important to deepen and sustain economic engagements with Afghanistan for its reconstruction and economic development and lastly, to ensure a well-resourced and time-bound return of Afghan refugees to their homeland with dignity and honour.

“At this moment of hope, I'll reassure my Afghan brethren that Pakistan will always show full support and solidarity with them as they continue their momentous journey on the path of peace, security, and development,” the minister affirmed.