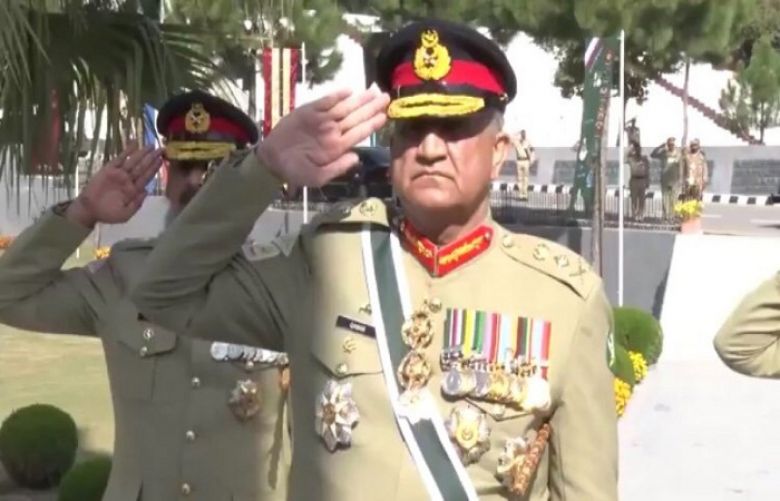 According to details, the main ceremony of the Defence Day was held at General Headquarters (GHQ) in Rawalpindi to pay tributes to the martyrs.

A ceremony in connection with Defence and Martyrs Day was also held at Naval Headquarters in Islamabad. Naval Chief laid floral wreath at the memorial of martyrs and offered Fateha.

An impressive change of guard ceremony was held at the mausoleum of Quaid-e-Azam Muhammad Ali Jinnah as the nation is celebrating Defence Day across the country today to pay tributes to the martyrs and ghazis.

A smartly turned out cadets of the Pakistan Air Force’s (PAF) Asghar Khan Academy assumed the ceremonial guard duties at the mausoleum. Air Vice-Marshal Shakil Ghazanfar graced the occasion as the chief guest.

In Lahore, an elegant change of guards ceremony was also organized at Allama Iqbal’s mausoleum where a contingent of the Punjab Rangers took over guard duties.

The nation is celebrating Defence Day across the country today to pay tributes to the martyrs and ghazis and reaffirms commitment to defend the motherland against all threats.

The day dawned with 31 gun salute at the federal capital and 21 gun salute at provincial capitals. Special prayers were offered after Fajr in mosques for the progress and prosperity of the country and independence of occupied Kashmir from the cruel clutches of India. Fateha and Quran Khawani are also being held for the martyrs.

In his message on Defence Day, Prime Minister Imran Khan said September 6 is a day in Pakistan’s glorious history that is commemorated as a symbol of courage, strong will and unmatched spirit of sacrifice by the country’s gallant armed forces.