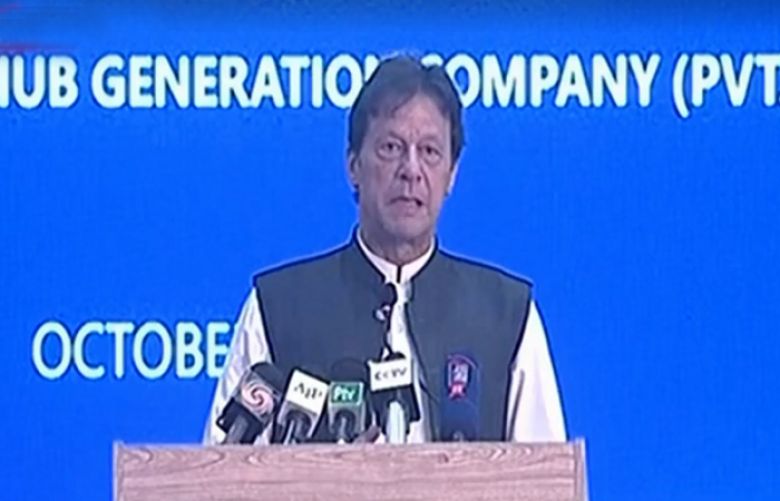 Addressing the inauguration ceremony of the 1,320-megawatt China Hub Power Generation Plant in Balochistan, the prime minister said that he wanted to see the pattern of joint projects continue under CPEC.

"I am happy that under CPEC, the first joint project [is being inaugurated]. We want to see the pattern continue," the premier said, adding that big Chinese companies want to come to Pakistan.

"The joint projects are welcome; the government will fully support [such projects]," he said, requesting the managers of the newly built power plant to consume at least 20 per cent coal from the Thar coal reserves.

The project "will help us reduce the Current Account Deficit (CAD)," he added.

Prime Minister Imran said that there was a huge CAD when the Pakistan Tehreek-i-Insaf (PTI) assumed power, and held the deficit left by the previous government responsible for the prevailing inflation.

The premier regretted that the country's capacity for hydro power was not utilised in the past.

He also asked the local and Chinese companies which built the power project to accelerate work on a desalination plant for Karachi "as water is a big issue for the city".

The premier said that he was told by an executive of a foreign mining firm that Pakistan has the best and the largest gold reserves in the world, which can be mined very easily.

He noted that mining companies didn't come to Pakistan only because of corruption. "I have been saying for the last 22 years that corruption is the biggest issue of Pakistan," the prime minister stressed.

"Investment does not come if corruption persists."

He said that the country is under burden of loans today not because nature has deprived Pakistan of resources but due to corruption.

The country is making progress on CPEC projects, the prime minister said.

"They (China) have agreed to cooperate in the fisheries and agriculture sectors."

Prime Minister Imran stressed the need to mobilise the country's resources and population. "We have to make our young population our asset. They will propel Pakistan," he said.

He also asked the chief minister to built a Special Economic Zone in Lasbela.

The premier was also scheduled to meet MNAs and MPAs from Pakistan Tehreek-e-Insaf (PTI), Muttahida Qaumi Movement (MQM) and the Grand Democratic Alliance (GDA). He will also meet with a delegation from a transportation company to discuss transport issues in the metropolis, Radio Pakistan added.

The premier will be briefed about ongoing development projects in Karachi funded by the federal government.

As per a post shared on the prime minister's Facebook page, he is accompanied by Minister for Parliamentary Affairs Azam Khan Swati, Minister for Planning and Development Khusro Bakhtiyar, Federal Minister for Water Resources Faisal Vawda, Special Assistant to Prime Minister on Petroleum Nadeem Babar and PTI stalwart Asad Umar.