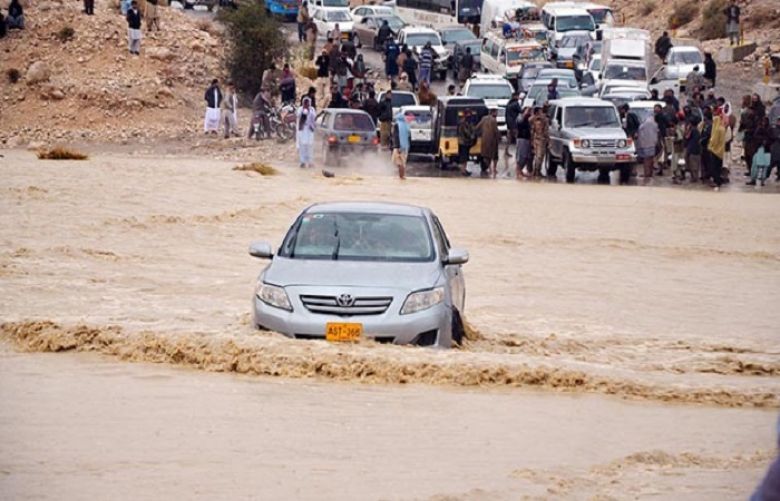 At least four people died and one injured as a flash flood "system" — that entered Balochistan after wreaking havoc in Iran — swept away a car Saturday evening in the Pishin district, authorities said.

According to Levies officials, the flood in Khanai Baba River hit the car of Abdul Noman and his family, all residents of Kuchlak and who were on their way to attend a wedding in Khanozai, and swept it away in its strong currents.

Abdul Noman, alongside his grandchildren Ubaid Khan, Saraun Khan, and Saffan Khan, were all in the car when the flood took it and declared dead later. A woman nearby was injured but saved by the rescue personnel.

The woman who was saved was transferred to a local hospital and was being tended to.

The flooding had also caused hundreds of millions of dollars of damage to Iranian agriculture as the parliament speaker questioned whether government funds would be adequate to compensate communities and farmers.

About 1,900 cities and villages have been affected by floods and exceptionally heavy rains since March 19.

Now, however, that the clouds system has entered Balochistan, the Pakistan Meteorological Department (PMD) and the Provincial Disaster Management Authority (PDMA) have forecasted storms and heavy rains and said it was expected to stay for at least a couple of days.

In addition, the canals and rivulets in the province are expected to overflow and, thus, warnings have been issued.

The PDMA, on the other hand, has issued an alert given the forecast of heavy rains in the coming week. It has further written a letter to the deputy commissioners of all districts in Balochistan, advising the imposition of Section 144 on all picnic points.

Moreover, the Gwadar district administration, in light of extreme stormy rains, has advised all fisherfolk to stay out of the sea today and tomorrow.