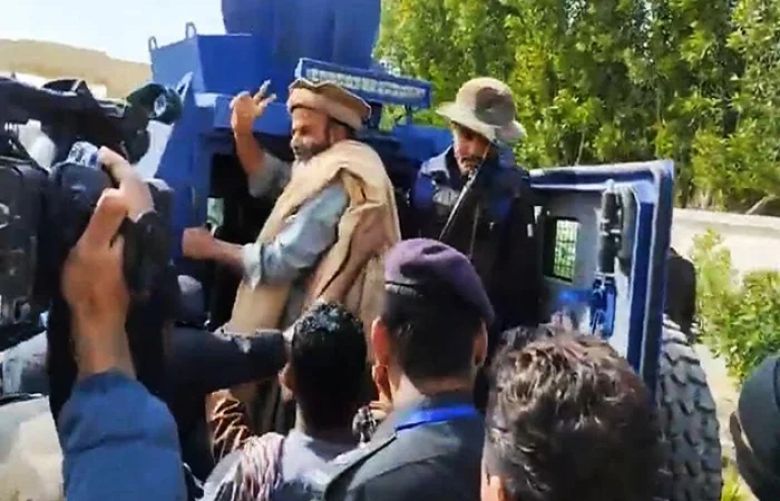 A local court in Gwadar handed over Haq Do Tehreek (HDT) leader Maulana Hidayat Ur Rehman to the police on physical remand, a day after arresting the civil rights activist.Rehman was arrested by the Gawadar police Friday and was produced in the court of Additional Sessions Judge Gwadar today.

The police also produced before the court three other suspects and requested their physical remand.

The request was accepted by the court which then handed all four to the police on physical remand for 4 days.

According to the police, cases have been registered against the HDT leader under various provisions including disturbance of peace and sedition in Gwadar.

A heavy police contingent present outside the local court Friday arrested the HDT leader and three others, including Naseeb Nosherwani and Hassan Murad, days after he said he would reach Gwadar to surrender before the law enforcers.

The HDT leader was nominated in the first information report (FIR) of the death of a police constable — Yasir Saeed — who was killed by unknown assailants on November 27 during a protest in Gawadar.

The police, in a statement, said a bullet hit the constable in the neck and he died on the spot. Following this, Balochistan Home Minister Ziaullah Langove ordered the police to register a case against the HDT leader.

The FIR, in which Rehman and others were nominated, alleged that the HDT leader provoked and incited people at the protest to pelt stones at government vehicles, following which the people threw stones and shattered the windowpanes of a police officer’s car.

The Gawadar protests, in which the unfortunate incidents took place, had a wide range of demands and had been going on for two months under the HDT leadership.

The protestors were demanding a reduction in the number of check posts, easier border trade, and a total end to deep-sea fish trawling in the sea next to Gwadar.

However, the death of the constable led to the arrests of seven HDT supporters, along with HDT leader Hussain Wadala, which heightened the matter, leading to a blockade of the Coastal Highway on December 26.

Balochistan government spokesperson Farah Azeem had alleged that the protestors tried to shut the Gwadar port after which the police took action and arrested some of them.

She added that the movement’s attitude was provocative.