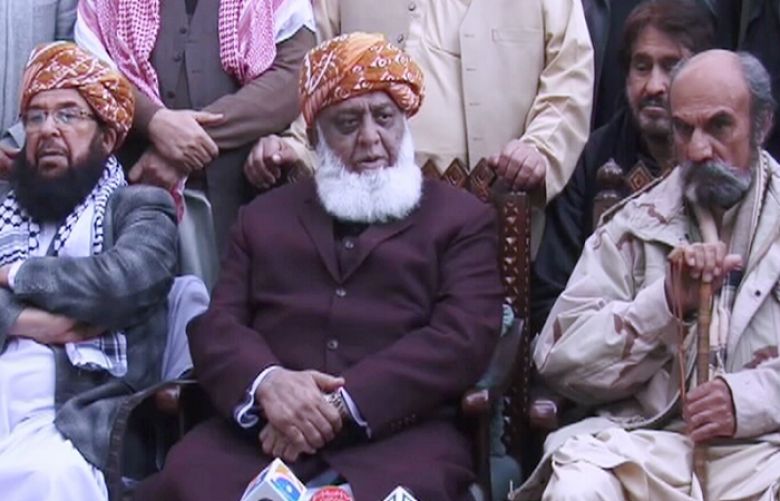 Jamiat Ulema-i-Islam-Fazl (JUI-F) chief Maulana Fazlur Rehman said on Monday that his party was the "biggest political power" in Khyber Pakhtunkhwa (KP) — where local government elections were held a day ago and incoming unofficial results show that his party is leading.

In a big blow to the Pakistan Tehreek-i-Insaf (PTI), which has ruled KP since 2013, unofficial results put JUI-F's Zubair Ali as the winner for the coveted post of provincial capital Peshawar's mayor.

"I believe we are leading at the tehsil and union council level in Khyber Pakhtunkhwa's local government elections," Fazl said while speaking to the media in Quetta, adding that "time has proved that last elections were rigged."

"JUI-F was and is the biggest political power in Khyber Pakhtunkhwa," he said in response to a question about the local government elections.

However, he went on, "Some forces have been trying to place hurdles in the way of the JUI-F."

Fazl said these forces were apprehensive about the JUI-F rising to the power as the party was inclined towards religion.

"They fear what will America and the West think," he said, adding that the US and West had settled matters with the Afghan Taliban. "Why will we be unacceptable to them then?" he asked.

He called for an end to the mentality of stopping a particular party from progressing and claimed that the JUI-F could run Pakistan in a better manner than the incumbent government.

"We know how to run this country. We are honest and by God's grace, the JUI-F is the only party [in Pakistan] that has not been accused of corruption," Fazl claimed.

He further stated that it had been proven that corruption allegations were being used as a "tool".

Warning that trends such as that of levelling corruption allegations would destroy the country's machinery, he emphasised that the practice of "maligning politicians must end".

"Because those who create this propaganda against politicians are far more corrupt than politicians," he remarked.

In reply to a question, Fazl, who is also the head of the opposition alliance Pakistan Democratic Movement (PDM), said preparations were under way for protests across the country.

He said he would soon visit Karachi where he would meet other opposition leaders to discuss the strategy for the protest to be held by the PDM on March 23.

'Tabdeeli is on its way out'

Separately, PML-N Vice President Maryam Nawaz also made an apparent reference to the PTI's disappointing performance in KP's local government elections, saying that "tabdeeli (change) is on its way out."

Taking a jibe at the PTI's famous slogan of bringing a "tabdeeli" (change) in the country, she tweeted: "After being shamed, slandered and cursed millions of times, pushing a nation of 220 million into a mire of inflation, lawlessness and incompetence ... tabdeeli is on its way out."