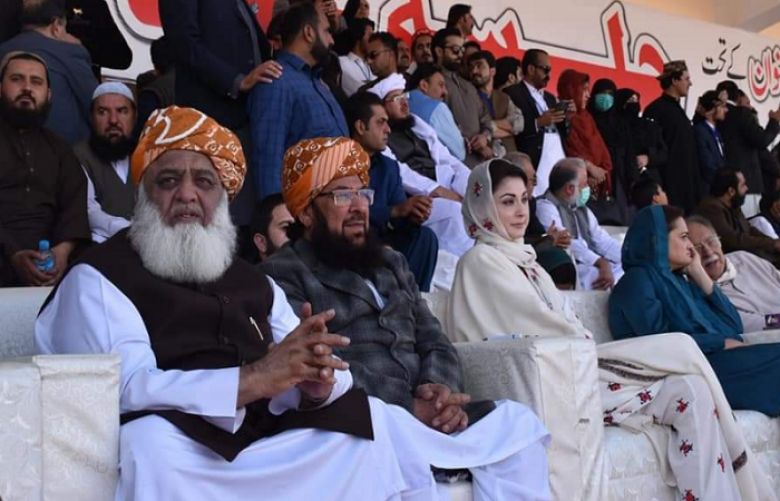 The 11-party anti-government Pakistan Democratic Movement (PDM) alliance on Sunday held its third power show — this time in Quetta — despite Balochistan government's appeal to postpone the public meeting in view of security threats.

PDM president Maulana Fazlur Rehman was also in attendance at the rally in Ayub Stadium, along with other political leaders who are part of the alliance.

PML-N vice president Maryam Nawaz in her speech said that the time has come to change the fate of Pakistan — and Balochistan.

"No longer will husbands and brothers go missing, people of Balochistan," she said addressing the attendees.

"The reason you are deprived of food and shelter is that your vote is not respected. Those who rule you are not answerable to you but to someone else, someone else pulls their strings," she said.

The former premier's daughter told the crowd that Quaid-i-Azam Mohammad Ali Jinnah, in one of his speeches at Staff College, Quetta, had stated that policymaking is the job of civilians and had instructed serving officers of the state to abide by their oaths.

"Tell me, has Quaid's instruction been followed?"

She lauded a recent Supreme Court judgement that declared the references filed against Justice Qazi Faez Isa — who hails from Balochistan — were based on "malafide intentions".

"I urge the courts to give justice to Shaukat Aziz Siddiqui as well who was removed for speaking the truth," she said, referring to the deposed Islamabad High Court judge, who was removed in 2018 after the Supreme Judicial Council found him guilty of misconduct over a speech he delivered before the Rawalpindi District Bar Association.

Maryam also demanded CPEC Authority Chairman retired Lt Gen Asim Saleem Bajwa to step down from his position, citing allegations against him and his family of offshore properties and businesses. She also accused him of "toying with the respect of vote" and interfering in politics during his tenure as an officer in Balochistan.

PPP Chairperson Bilawal Bhutto-Zardari addresses PDM's Quetta rally via video link. — DawnNewsTV
PPP Chairperson Bilawal Bhutto Zardari, who is in Gilgit-Baltistan for the upcoming elections in the region, addressed the participants via video link. "Will Balochistan's people always be neglected?" asked the PPP leader. "No matter which province, the people want freedom and a democratic government. They want freedom from poverty and unemployment, to be able to think for themselves and breathe."

"What sort of a democracy is this where the media isn't free and neither is the judiciary."

He also raised the issue of missing persons and said that Pakistan could not be termed as a modern democracy until the matter was resolved.

He said that during PPP's tenure, his father and then president Asif Ali Zardari had "not only asked for forgiveness [from Balochistan] on behalf of the state but started something that could have provided what they were deprived of".

"In the form of 18th Amendment, [Zardari] restored democracy [...] We fulfilled Balochistan's demand for provincial autonomy in the form of 18th Amendment," Bilawal told the crowd. Aghaaz-i-Huqooq-i-Balochistan package, Bilawal said, was a beginning for all provinces to end their problems by taking governance into their own hands. The package included constitutional amendments, political reconciliation, NFC award, royalties for provincial resources among others, he said and regretted that it was not being implemented.

The PPP chief said that the China Pakistan Economic Corridor (CPEC) was the result of a four-year struggle by Zardari and added that the project was meant for the benefit of deprived regions including Gilgit Baltistan, erstwhile Fata and Balochistan province.

"Today, those who term CPEC as a gamechanger should think that without Balochistan and its Gwadar, without GB and its borders, there is no CPEC," he declared and asked why CPEC had still not benefitted the people of Balochistan and GB. He accused Prime Minister Imran Khan of "trying to turn CPEC into a failed project", adding that the incumbent premier had "not given anything to Balochistan, but instead was trying to snatch from the province".

JUI-F chief Fazlur Rehman, who was the last to address the rally, condemned the arrest of PML-N leader Safdar and the 'detention' of MNA Mohsin Dawar at the Quetta airport, saying that the latter incident was "contrary to Balochistan's traditions".

Rehman insisted that he was not against institutions but "when they impose martial law on Pakistan or when they back a fake government, it is our right to complain and protest".

"Even today, if our establishment stops backing [this] fake government, if it apologises before the nation that 'we did wrong during the elections and ruined Pakistan's mandate', we are ready to hold it in esteem," he said.

He said that JUI-F had played its part in protecting the 18th Amendment and, by holding 'all parties conferences' in all provinces, had succeeded in creating a consensus. He assured that his party would not allow anyone to curb the rights of any province.

Referring to Supreme Court's verdict in a case pertaining to the presidential references against Justice Isa, Rehman said that the government should resign as it has lost its "moral authority".

Rehman said that in the contemporary world, a country's survival depended on its economy, not defence — though that was integral as well.

He said that when the late Atal Bihari Vajpayee, who was part of the Bharatiya Janata Party (BJP), was prime minister of India, he came to Lahore because he wanted to start trade with Pakistan due to the latter's growing economy. Rehman said that India was being ruled by BJP again but its prime minister Narendra Modi's behaviour with Pakistan was unfriendly because of the latter's weak economy.

He accused the incumbent government of "annoying China" as well as Iran and Afghanistan because it had "no idea about foreign policy".

He also termed the government as a "seller of Kashmir", saying that the rulers had "quietly accepted" the Indian government's move of abrogating the special status of the occupied territory.