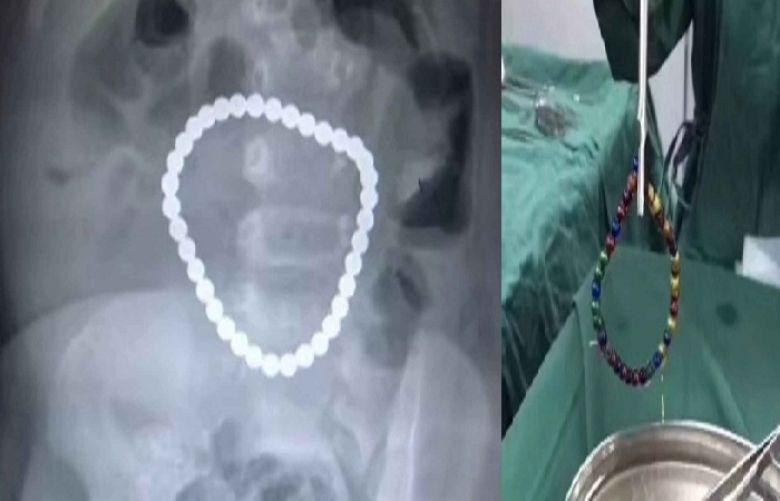 A toddler in China who was rushed to the hospital with severe stomach pain, high fever and a history of vomiting was revealed to have ingested 36 magnetic balls, which had attached to each other while in her digestive tract and caused two holes in her intestine.

The 1-year-old girl, who was not identified  landed at Second Affiliated Hospital of Wenzhou Medical University in Wenzhou, of the Zhejiang Province in east China, after being transferred from a local clinic.

Dr. Lin Xiaokun ordered an X-ray of her abdomen, and determined that she had swallowed them one by one, so it was not easy to notice for the family.Because of the magnetic power, all the swallowed balls attached and damaged the intestine, Xiaokun said, Especially when balls attached between intestines. It will cause anabrosis in the intestines. That’s why there are two holes in the girl’s intestines.

Pediatricians have long noted the dangers associated with ingesting magnets, so much so that in the U.S., the Consumer Product Safety Commission (CPSC) standards for children products and toys was adjusted in 2008 to ensure that magnets will not fall out or become unattached from children’s products.

According to the American Academy of Pediatricians (AAP), anecdotal reports have shown that magnetic ingestions have led to dozens of surgeries, bowel perforations or fistulas, endoscopies, bowel resections and other serious gastrointestinal injuries.

Parents are advised to keep such products out of reach of children, and to closely monitor loose magnets or magnetic products and contact a pediatrician immediately if they suspect a magnet has been swallowed or inhaled.